Start a Wiki
watch 01:48
The Loop (TV)
Do you like this video?
Daisy (Anna Akana) is one of the seven antagonists in the 2015 comedy horror film "Kids vs Monsters".

In the film, a group of rich parents are fed up with their entitled and spoiled offspring.  They decide to take their kids to a mysterious mansion, where they will be killed off by a group of monsters in training.  It is meant to be a satire picking fun at teens today.

Daisy is the fifth of seven monsters introduced to the group.  She is originally lying on a bed in a room the kids run to when they are were being chased by Monsieur Babette the lumberjack bigfoot.  She is in cat form, but begins talking to them.  When the kids realize that a cat is talking to them, she transforms into a cat girl dressed in a school girl outfit with plaid skirt.

From Big Boss, we learn that she is the result of a union between a visiting siamese cat from Japan and a common American tom cat, that produced a demon cat.

Daisy breaks it to the kids that they were sent here to be disposed of.  Upon hearing this, they are in denial, saying that their parents wouldn't do anything to put them in harms way.  Daisy begins to tell each of them the harsh truth of why their parents are disgusted by them.  He tells David that since his father is a crime lord, he is sick of his son being a goody too shoes, and that he is an embarassment to his name.

After Candy Charms (Francesca Eastwood) tells her that her father thinks the world of her, the cat responds, "Do you have any idea how many judges daddy dearest has to bribe just to shut you up?  Oh sure, maybe he's proud of his little barbie doll, but he's prouder of his money".  As Candy begins to cry, she is mocked by Daisy, who says "the truth hurts".  She goes on to tell the rest of them that their parents find them to be nothing more than a drain on their finances.

Daisy asks the kids which one of them she should kill first, and chased the kids out of the door.  Before she could give chase, she was cornered by Babette, who told her that he has always been a cat lover.  Unimpressed and grossed out by the pick-up line, she brushes past him telling him, "I have a job to do".

Back down stairs, Daisy spies David and Molly come into a room. From a perched position above a doorway, she pounces down onto David's back.  David is able to slam her into a piano, and Molly then slams Daisy's tail into the piano keys cover.  Then David grabbed a soda bottle from the bar and began spraying Daisy.  Daisy like most cats don't like to get wet, and ran out of the room.

Daisy then teamed up with Babette and Mr. Beet to attack Bobby. They are able to kill him, but David and Molly escape out the door.

Daisy is next seen hitchhiking on the side of a road.  She successfully flags down an unsuspecting motorist driving a convertible jeep.  She destracts him with poses as he snaps photos with his phone.  In the meantime, Mr. Beet and Babette come up and dispose of him.   Now that the three monsters have a convertible jeep, they give chase to the two remaining kids who are on a bicycle.  As David drives, Molly begins to throw fruit at them.  Babette who is sitting in the back seat, accidentally steps on Daisy's tail.  Daisy in turn goes beserk, and causes Mr. Beet who is driving to lose control of the car.  The car goes off the road, and is teetering on the edge of a high cliff.  It seems that they avoided the inevitable, but Daisy's tail is in Babette's face, and he begins to sneeze.  After the third sneeze, the car rocks forward and goes off the cliff.  There is a huge explosion and the last remaining monsters are dead.  Daisy must have used up her nine lives, as this is the end of the furry feline. 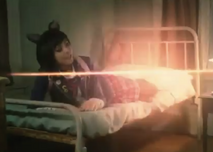 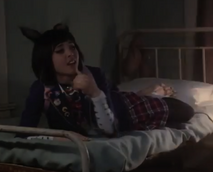 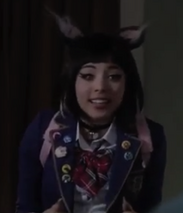 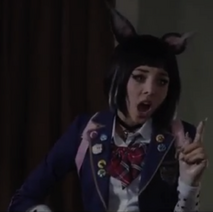 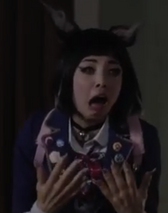 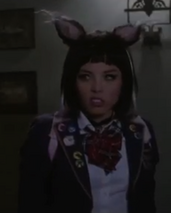 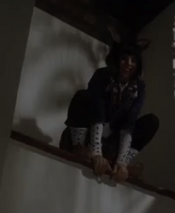 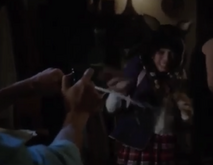 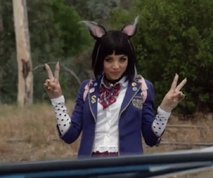 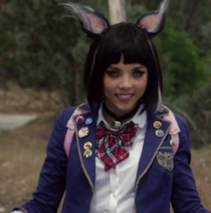 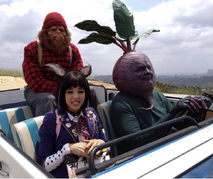 Add a photo to this gallery
Retrieved from "https://femalevillains.fandom.com/wiki/Daisy_(Kids_vs_Monsters)?oldid=192943"
Community content is available under CC-BY-SA unless otherwise noted.