Start a Wiki
watch 01:51
The Loop (TV)
Do you like this video?
D (Michelle Martonick) is henchwoman in the 2012 episode "The Captive" (episode 16) in the action comedy web series "The Adventures of Superseven", which appeared on YouTube from 2011-2015.  In the credits, she is listed as Polly Amarice, but this is a psuedo name for Michelle Martonick.

In the episode Superseven (Jerry Kokich) wakes up and finds himself a captive in a surreal village known as "The Hamlet".  He first finds himself in an apartment buiding, and heads to the laundry room of the complex.  There he pounds the table to get answers and startles a lady dressed in purple who is using the washing machine behind him.

Next Superseven finds himself poolside with a bearded man dressed like Colonel Sanders, who goes simply by the name of "B".  B offers Superseven some Tea.  At first, Superseven tells B that he does not want any.  However, he changes his mind when he sees an attractive red head wearing a lovely French Maid outfit.  The outfit includes a one-piece skirt dress, with white ruffles, blouse, apron, and lacy head cap.  She has thigh high white fishnet stockings with a black stilletos.  The maid goes by the name of "T ", which confuses Superseven.  The two men admire the lovely T as she exits the courtyard.

Later we see D laying on the grass playing a game of chess.  In a close up, she is singing the tune "Dem Bones".  Suddenly, Superseven finds himself back in the parking garage dancing with four girls known as The Stillettos.

At the end of the episode, Superseven wakes back up in his apartment building.  He peaks out of his door into the hallway, and the same girl from the laundry room is now sweeping with a broom.  She looks over at him with a coy smile and waves.  Superseven waves back and heads inside his room believeing that he has dreamed the whole thing.  However, he is confused to see the same beachball that D had lying on his couch.

The same girl (Michelle Martonick) played the parts of "T", "D", and the girl from the apartment complex at the beginning and the end. 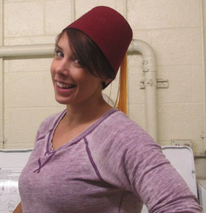 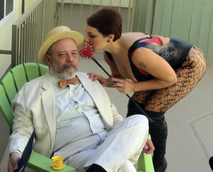 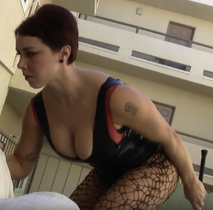 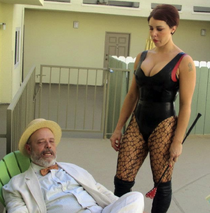 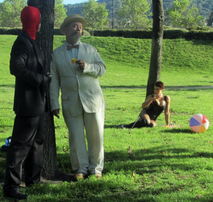 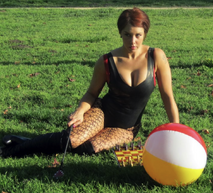 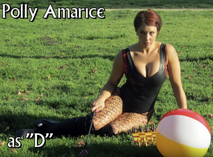 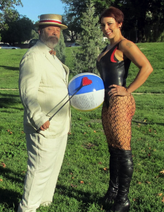 Add a photo to this gallery
Retrieved from "https://femalevillains.fandom.com/wiki/D_(The_Adventures_of_Superseven)?oldid=192539"
Community content is available under CC-BY-SA unless otherwise noted.