Cynthia Lane is the villainess of "Hell Is Other People", case #2 of Criminal Case: The Conspiracy, the 5th season of the crime solving game Criminal Case (release date January 25, 2018). She was a resident of Fairview and was known for planning much of her neighborhood's events, a fact that she highly prided herself on.

Cynthia was also the next-door neighbor of Elaine and Aaron Seabrook, the newest additions to the neighborhood. Cynthia's attempt to welcome Elaine to the neighborhood by inviting her to her exclusive monthly neighborhood dinner party went sour, though, as Elaine proceeded to get drunk and vomit on Cynthia's peonies, killing them.

Cynthia, having been tending to her flowers over the past year for Fairview's Best Kept Garden competition, was enraged at Elaine for destroying her peonies and decided to kill her. The evil Cynthia attacked Elaine outside her home with a nailgun, killing her with a nail to the forehead before nailing her to her fence. When first questioned by the player and detective Gloria Hayes about Elaine's death, Cynthia claimed that she hadn't yet gotten to know Elaine to cover for herself.

But ultimately, the evidence pointed to Cynthia's guilt and she was brought in for interrogation. After trying to deny everything, Cynthia confessed to killing Elaine, proclaiming that Elaine deserved to die for "sabotaging" her flowers and that they had no idea the kinds of pressure she was under in her need to be perfect. Cynthia continued to rant about the pressures of suburban life during her trial to judge Judith Powell, leading her to sentence Cynthia to twenty years in prison with access to psychological counselling. After her sentence was given, Cynthia asked the judge if there would be gardening available in prison. 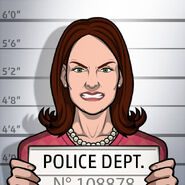 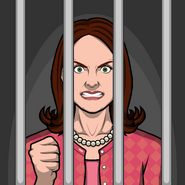 Add a photo to this gallery
Retrieved from "https://femalevillains.fandom.com/wiki/Cynthia_Lane_(Criminal_Case)?oldid=140765"
Community content is available under CC-BY-SA unless otherwise noted.