The Female Villains Wiki
Register
Don't have an account?
Sign In
Advertisement
in: 2000s, Callous, Corpse,
and 11 more

View source
watch 02:56
Doctor Strange in The Multiverse o Madness - The Loop
Do you like this video?
Play Sound

Cynthia Hamilton (Judith Hoag) was the main villainess from "Head Case," episode 4.03 of Castle (airdate October 3, 2011). She was the wife of Lester Hamilton, a scientist who was studying human life extension.

The couple made a deal to have themselves cryogenically sealed after death, as Lester felt that they got married too late and one lifetime wasn't enough for the love they had to share. Lester had developed the Ambrosia Project, which was intended to extend the human life span, but he was later diagnosed with an inoperable brain tumor. He kept the illness from Cynthia and went to his friend and colleague, Dr. Philip Boyd, who had been experimenting with targeted treatment of tumors. This was done due to Lester's knowledge that conventional medicine had limits, but unfortunately, the treatments failed, as the tumor was spreading and leaving Lester with just months to live.

Cynthia had actually found out about Lester's tumor, and she was informed by her husband that he planned to continue his research instead of being frozen after his passing. In response, and out of her selfish desire to go through with their original plan, Cynthia turned heel and shot Lester to death, and later destroyed his cryonic resignation letter. After the murder, the maniacal villainess sent her husband's body to the Passageway cryogenics company, where it would be sealed as originally planned. The company's head, Dr. Ari Weiss, was actually a suspect in the murder, but Kate Beckett and Richard Castle ended up revealing Cynthia as the killer, due to Castle's comment about Lester's brain being preserved as a result of the actions, rather than ravaged by the tumor.

During Cynthia's interrogation, she originally denied even knowing about the tumor, but she eventually recanted and confessed to killing Lester. Regarding her reasoning, the evil Cynthia stated that Lester wasn't in his right mind due to the tumor, while also claiming that she was protecting their future together. Cynthia was later arrested, leaving Castle and Beckett to wonder if what she did was out of love or insanity. The charges against Weiss were officially dropped, but shortly after this, a biowatch signal went off and revealed that a client of his had flatlined. When it was revealed to be coming from inside the building, the group rushed to the holding cell, where they found Cynthia deceased, having ingested a cyanide pill to commit suicide. She was found with a photo of herself and Lester. 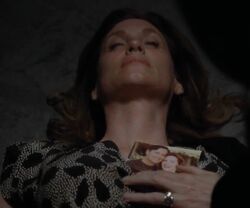