Cynthia Dern (aka Allison Porter, aka Allison Goldman) was the true main villainess from "Ghosts," episode 1.08 of Castle (airdate April 27, 2009).

Cynthia Dern was part of an eco-terrorist group that consisted of Jared Swanstrum and Susan Mailer, and after the Exxon Valdez Oil Spill, the three of them colluded to plant a bomb on an oil tanker. Swanstrum built the bomb, while Dern and Mailer planned to plant the bomb.

However, the ship's captain, Sam Pike, got on board after the bomb was placed, causing a snag in the plan. Susan wanted to go back and defuse the bomb, not wanting harm to come to Pike, but Cynthia wanted the plan to go through, and escaped while Mailer attempted to save the captain's life. The bomb went off, crippling Sam and (assumingly) killing Susan.

Dern's true evil colors came out after the events aboard the ship, as while she went into hiding, she sent an anonymous tip to the FBI and turned Swanstrum in after he backed out of trying to escape to Canada with her. She later changed her name to Allison Porter, stealing the identity from a three-month old baby who died in 1963, and then met and married Michael Goldman.

20 years later, Cynthia (who was facing financial problems) decided to go public with her version of the events, working with ghost writer Lee Wax to pen a book about the bombing. She was paid a few hundred dollars a week, with a potentially big jackpot if her book became a bestseller. Cynthia painted herself as a hero in her story and placed all of the blame on Susan by depicting her as a maniacal villainess hellbent on bombing the tanker. Dern also claimed that she wanted to save Pike and attempted to dissuade her partner in crime from going through with the plan, only for Mailer (as Cynthia claimed) to plant the bomb anyway and eventually perish when the device detonated.

However, to Cynthia's surprise, Susan was revealed to have survived the explosion, though part of her right arm, her neck, and her face became scarred as a result. Mailer had learned about Dern's twisted and self-serving narrative, prompting her to come out of hiding and warn the greedy villainess that she would turn herself in and reveal the entire truth. Needing to keep her ruse alive, the evil Cynthia plotted to murder Susan, first by inviting her to her hotel room for drinks. She spiked Mailer's glass with Remian (a sleeping pill) and then filled the bathtub in her bathroom with oil, planning to drown Susan there and make it appear that the "villainous" woman committed suicide out of guilt, which would guarantee sympathy for Dern and increase book sales. However, Susan turned down the wine, stating that she doesn't drink, and became suspicious of Cynthia's motives when she refused to let her leave. After hiding in the bathroom and seeing the tub filled with oil, Mailer realized her one-time co-conspirator's evil plan and fought with her, ending with the latter knocking herself unconscious before being pushed into the tub by the former, resulting in Dern drowning in the oil.

Cynthia's corpse in her hotel room's tub, which she filled with motor oil 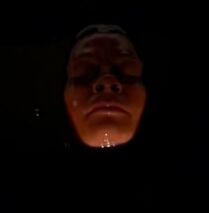 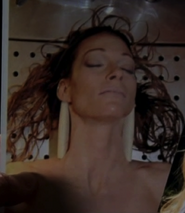 Add a photo to this gallery
Retrieved from "https://femalevillains.fandom.com/wiki/Cynthia_Dern_(Castle)?oldid=168939"
Community content is available under CC-BY-SA unless otherwise noted.