Frame a known rapist/murderer for her crime (failed)

Cynthia Cluxton (Amy Sloan) is the main villainess from "Lt. Jane Doe," episode 2.04 of NCIS (airdate October 19, 2004). She is a Petty Officer and a former acquaitance of Timothy McGee.

Cynthia was shown in the beginning of the episode at a scene where the body of a young woman, described as a Navy soldier, was found. The autopsy revealed that the victim was raped and strangled, and a trident was found on the woman's neck, similar to a Jane Doe who Dr. Donald "Ducky" Mallard was unable to identify from a case 10 years prior. In a twist, the woman was revealed as a civilian, and she was finally identified as Janice Santos.

Harlan Wilson, the man who raped and murdered the previous Jane Doe, was ID'd as Janice's assailant, but as McGee and Tony DiNozzo later found out, Harlan Wilson died five weeks prior to Janice's murder. Meanwhile, Cynthia arrived at NCIS and handed Leroy Jethro Gibbs a note that was apparently from Harlan, which indicated his role in Janice's murder. However, after it was uncovered that Harlan's DNA was planted on Janice post-mortem, McGee uncovered security video that showed Cynthia in the lab taking Harlan's DNA, which revealed her as Janice's killer.

Cynthia's father, NCIS Agent Dawes, worked on the previous Jane Doe case, which allowed her access to the DNA. It was also revealed that Cynthia was Janice's lover, as they met at a lesbian bar, but at some point, Janice broke things off with Cynthia, leaving Cynthia to become deranged and plan her ex-girlfriend's murder. One day after stealing Harlan's DNA, the evil Cynthia strangled Janice to death, and later dressed her in a military uniform as part of the ruse. The psychotic villainess later planted the trident on Janice and placed the DNA inside of her to set up Harlan, and she later went to the lab and inspected McGee and Abby Sciuto's progress, doing so to make sure that she could get away with her murderous actions.

However, after the video was uncovered, Gibbs interrogated Cynthia, who calmly denied everything, until Gibbs informed the villainess that the man she was trying to frame had died weeks prior to the murder. After learning this, Cynthia went into a psychotic rage, but attempted to retain her calm demeanor. Her outburst uncovered her true personality, and Cynthia was arrested (off-screen) for Janice's murder. 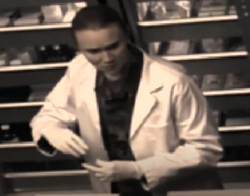 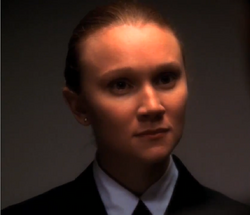 Cynthia during her reveal and interrogation
Add a photo to this gallery
Retrieved from "https://femalevillains.fandom.com/wiki/Cynthia_Cluxton_(NCIS)?oldid=174836"
Community content is available under CC-BY-SA unless otherwise noted.