The Female Villains Wiki
Register
Don't have an account?
Sign In
Advertisement
in: 1990s, Beauty Mark, Blonde,
and 21 more

Cynthia Caldera is the main antagonist of the 1990 film Lionheart.

She was portrayed by Deborah Rennard.

Cynthia Caldera is the wealthy promoter of an underground illegal fighting circuit. With her henchman Russell, she runs fights primarily in New York but also has a division in L.A. She is depicted as vain, domineering & cold.

Cynthia first appears at one of her New York fights, where she reconnects w/a former fighter of hers, Joshua, & his find, Lyon Gaultier. She begins a light flirtation w/Lyon, but to no reception from him. She sets Lyon up for a fight on the spot, giving him the name "Lionheart". He wins the match in seconds, only to get into a confrontation w/one of Cynthia's dissatisfied wealthy patrons. Cynthia reams him for the confrontation later in her limo. Cynthia offers them more fights, but Lyon is done fighting & committed to going to L.A. to see his brother's family. After paying Lyon & Joshua their earnings, she lets them out on the street, giving Joshua her L.A. info, as she knows that Lyon's $5,000 in winnings won't go far.

In L.A. after being rebuffed by his sister-in-law Helene, Lyon gets wasted w/Joshua. Joshua, knowing they need a place to stay, calls Cynthia & gets her limo to pick them up & take them to her place. The next morning, Lyon wakes up to Cynthia working out. She has had his clothes burned & plans made to go shopping for a new wardrobe. They go on the shopping trip, complete w/more advances by Cynthia & a hyping up of his previous fight. Lyon remained resitant to it all. After snooping around his sister-in-law & niece, Lyon realizes, for them, he needs the money that more fighting would bring. He tells Cynthia of his intention to fight for her & asks for a bank account to be set up. He also tells her that he's moving out of her place, to which she takes it personal, replies in a jealous & frustration-filled tyrade, & kicks he & Joshua out, keeping their relationship strictly business.

After a Lyon win in an empty pool fight, Cynthia & Russell confront Joshua about Helene as Lyon had the bank account made in her name. At Cynthia's notion that Lyon & Helene are intimate, Joshua comes clean about their phony insurance ploy to help Helene as she had wanted nothing to do w/Lyon. After the talk, she has Russell tail Lyon & Joshua more. When Russell finds Lyon being beaten & chased by French Legion officials(he was a deserter), he takes him to the hospital, where he is found to have a broken rib. Cynthia shows up at the hospital, displaying a shred of sincerity & apologetic at their last argument. She pledges to help him & his family.

Contrarily, Cynthia is next shown in her home, w/the 2 Legion officials, watching a video of a foreign juggernaut named Attila, who later is revealed to have killed 8 men while fighting. As Attila is Lyon's next opponent, she wants the Legion officials' green light in order to prevent legal interference in the fight taking place. In return, she'd hand Lyon over to them "as is". They offer only 1 stipulation: front-row seats. Later, Lyon & Joshua are escorted by Cynthia & Russell to meet her foreign patrons. They watch the video of Attila(a compromised version that omits the phase showing Attila's dominant win) & Cynthia states her complete confidence in Lyon w/a $250,000 wager on him. Her patrons state that they'll know where they're betting on the day of the fight. Cynthia's "confidence" in Lyon is poked into when, as Lyon is spending time w/his family, she is the one to pick up Attila when he lands.

On the day of the fight, after finding out that Lyon's rib is in bad shape, Joshua meets w/Cynthia right before betting closes. The odds are in Attila favor; 3 to 1.5. She refrains from giving her bet while poking at Joshua's new shaky faith in Lyon. During the fight, Cynthia is visibly smirking at the upper hand Attila jumps to, thus confirming to Lyon & Joshua that she bet against them. When Lyon is on his last legs, Joshua confirms he put his money on Attila as an effort to get Lyon to stay down. However, this news only engineers a roaring comeback as Lyon storms back, to the disdain of Cynthia & Russell but insane applause of the rest of the crowd. In a comical spot, as Lyon kicks Attila over the guardrail, Russell tries to get him out of the audience at the prodding of Cynthia, only to receive a kick in the face from Lyon for his trouble. Lyon lays in a number of blows before jumping over the guardrail for one last blow. He turns from Attila's defeated body to see Cynthia's mixed expression of shock & dismay. He drops his fist & is exhaustedly escorted out by the Legion officials. Cynthia hurries for the exit afterbeing ridiculed by her victorious patrons. She rushes outside to her limo, only to find it blocked in. She is last seen sitting in her limo as Lyon is exiting. As they shre one last numb glance, the men w/the betting house escort her back inside w/orders not to let her leave until she has paid her marker. Her last words is her swearing to have the money by tomorrow. 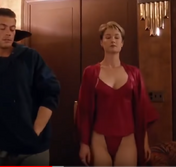 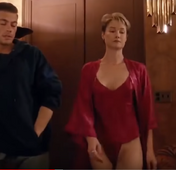 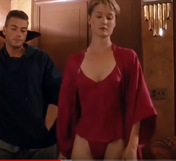 her dark business does not seem to work 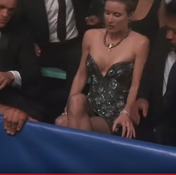 motivation for the looser

who is defeated does not need to worry about mockery

The EB feels a little uncomfortable and meek now