Cruella De Vil (Rachel York) is the main villainess in the 2009 Broadway Musical "The 101 Dalmatians Musical".

In London in 1957, a pair of Dalmatian dogs, Pongo (James Ludwig) and Missus (Catia Ojeda), live with their human owners, the Dearlys, and enjoy a happy life.

One day Missus gives birth to eight puppies, and the family is visited by Cruella De Vil, a former classmate of Mrs. Dearly (Kristen Beth Williams). Cruella tries to buy the litter, but Pongo and Missus' owners refuse to sell them.

Cruella hires two men, Jasper (Michael Thomas Holmes) and Jinx (Robert Anthony Jones), to kidnap the puppies, along with many other Dalmatians in the city, to make dog-skinned fur coats.

Pongo and Missus run away from home to find their puppies. With help from other dogs across the country, they find them, along with many other puppies, at Cruella's mansion and must get them back home without getting caught by the pursuing Cruella and her henchmen. 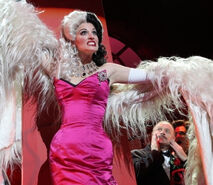 Add a photo to this gallery
Retrieved from "https://femalevillains.fandom.com/wiki/Cruella_De_Vil_(The_101_Dalmatians_Musical)?oldid=187942"
Community content is available under CC-BY-SA unless otherwise noted.