The Female Villains Wiki
Register
Don't have an account?
Sign In
Advertisement
in: 2000s, Blonde, Bondage Used By Villainess,
and 24 more

Cristina (Flavia Alessandra) is the main villainess in the Brazilian telenovela that included 145 episodes appearing from 2005-2006 entitled "Alma Gemea", which translates in English as "Soulmate".

The story of the telenovela was about the search for love of a man and a woman, who were seperated by tragedy and time.  The story begins in 1927 where a botanist named Rafael (Eduardo Moscovis) and a ballerina named Luna (Liliana Castro) are married.

Cristina is first seen as the housekeeper for the young couple, and is Luna's cousin.  She is bitter and feels wronged.  Her cousin is rich and married to Rafael, whom Cristina is infatuated.  In addition, Luna has inherited the family jewels from their grandmother.

On the debut of Luna's performance at the Municipal Theater, the couple is met by bandits.  One of the bandits Guto (Alexandre Barillari), is an admirer of Cristina.  We soon learn that Cristina has plotted with Guto to steal the jewelry  They steal the jewels of Moon, and in the conflict, Guto shoots.  Luna puts her body in front of Rafael, and is hit.  She dies at the hospital.

While Rafael is mourning his wife's death, a young girl Serena (Priscilla Fantin) is born in a distant hut.  Serena grows up in a small village.

As years pass, Serena comes to work as a servant in the house of Raphael.  When the two see each other, they both recognize that something exists between the two of them.  She meets Raphael and Luna's son Felipe (Sidney Sampalo), and immediately feels an impulse of mother to son.

Cristina has taken advantage of her position and seized control of her cousin's house with the excuse of helping Raphael raise the son.  She along with her ambitious mother Deborah (Ana Lucia Torre), plans to obtain Rafael's fortune through marriage to Raphael.  She feels threatened by Serena.

Cristina plots a plan with the collaboration of Guto and Ivan to make Raphael believe that Serena betrays him with Guto.  Raphael does not give Serena a chance to defend herself, and breaks off the engagement.

Cristina then gives Rafael a potion to make him look at her and see Serena.  She entraps him with a fake pregnancy and the two of them are married.  The marriage does not go well, and Cristina continues to do evil things, as well as keeping Rafael away from Serena.  Cristina then claims that she lost the baby.

In one episode, Cristina is humiliated by Mirna (Fernanda Machado) when she is thrown into a pig pen while wearing an elegant dress.  She then jumps ontop of Cristina and pushes her face down in the mud repeatedly.  This is done as the entire village looks on enjoying themselves.

When Guto is later arrested, Debora plans to kill him so no one knows who told him to kill Luna.  After buying the poison from the witch, Deborah puts the plan into action and Guto falls into the villain's armadillo and dies.  Another day with the same plan tries to kill Rafael, but she ends up drinking the poison and dies.

Later Cyrus and Roberval become suspicious of Cristina.  They discover the woman who prepares the poisons and plan to arrest her.  They arrest her as an accomplice to Cristina and Deborah.

Cristina is later haunted by the spirit of Guto who terrifies her and causes her to go crazy.

Enraged at being despised by her husband, Cristina sets fire to Luna's studio.  Rafael, struck by a chandelier, falls unconscious and suffers several burns.  While he is recovering, Cristina takes care of him, but actually hinders his recovery.

Later Serena overhears and sees Cristina kiss Ivan the driver and confess that she was involved in the death of Luna.  Cristina is expelled from the house, and Rafael is symbolicly married to Serena.

At the end, Cristina shoots Rafael and Serena.  The two die in each others arms, but they discover that they can never be seperated again.  Cristina flees to the attic of the house.  She tries on the tiera and the family jewels.  Suddenly a fire begins to engulf the room.  Unable to escape, a human form of the fire grabs Cristina, and she begins to burn up.  Her spirit is thrown into the mirror in the room, and it busts into a thousand pieces. 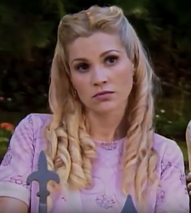 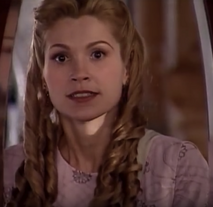 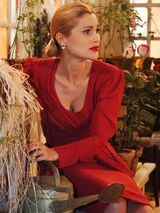 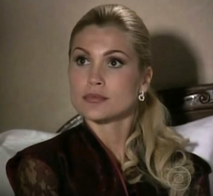 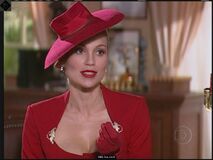 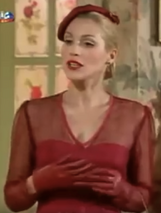 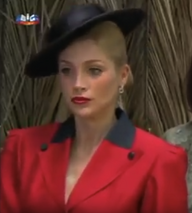 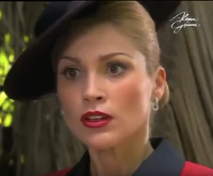 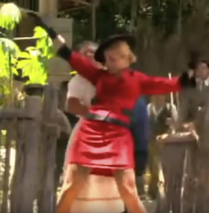 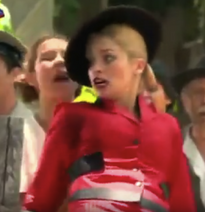 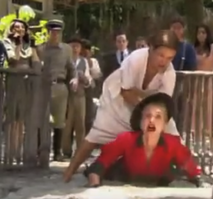 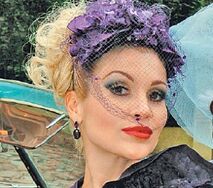 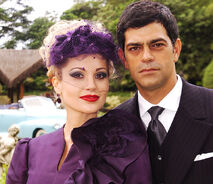 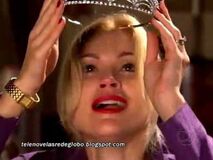