Start a Wiki
watch 01:51
The Loop (TV)
Do you like this video?
The Crimson Cobra was a seductive European spy who came to the United States to steal the secrets of Professor Dyzzi's poison gas. However, she comes up against Elmer Pippin and is swiftly defeated.

Crimson Cobra first appears in a car where she meets Elmer Pippin. She pretends to be Professor Nutt’s daughter, and when she kisses Pippin she uses a corsage to secrete knockout gas. Crimson Cobra then drives away.

Later, she appears in Nelly’s room. The crimson cobra bears a likeness to Nelly, which she plots to use to her advantage. The two begin a catfight, but Crimson Cobra gets the upper hand and knocks Nelly out. She then puts on Nelly’s revealing costume for the party.

At the party, Crimson Cobra meets Professor Dyzzi where she manages to Get him to kiss her. She then uses the knock-out gas to render him unconscious and escapes with the poison gas secrets.

She and her agents attempt to escaoe on a boat but Elmer Pippin’s boat crashes into hers, sending her and the agents tumbling into the water. She is last seen struggling in the water, but the next panel reveals she is under arrest. 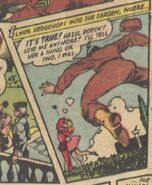 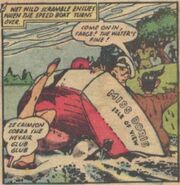 Add a photo to this gallery
Retrieved from "https://femalevillains.fandom.com/wiki/Crimson_Cobra_(Rangers_Of_Freedom_Comics)?oldid=158241"
Community content is available under CC-BY-SA unless otherwise noted.