Courtney and her friends kidnap their friend Elizabeth "Liz" Purr in order to surprise her on her 17th birthday. To keep Liz from screaming, Shayne puts a jawbreaker in her mouth, and they stuffed her in the trunk of a car.

However the big surprise was on them. They open the trunk of Shayne's car and found her dead, having choked to death on the jawbreaker gag.  In a panic they decide to make her death seem like she was raped.  They took Liz back to her house in order make it look like she was raped.

However, school outcast Fern Mayo had been asked by the principal to give Liz her homework.  When she arrived, Fern overheard the others arguing about what to do about Liz.  When they discovered Fern, they gave chase. Courtney offered her a make-over and told her they would teach her how to be popular.  After a bit of hesitation, Fern accepted.

After the make-over, they renamed her Vylette. The group discarded Julie and had Vylette taker her place in the group.

Courtney then went to a local bar and picked up a man, who she brought back to Liz's place and made it that they had sex.

Vylette became more popular than Courtney, which didn't go over well with Courtney.  She made posters which would reveal Vylette's true identity.  She posted them all over the school.  After the humiliation, Vylette took back her name, Fern and teamed up with Julie and Julie's new boyfriend Zack to get even with Courtney.

Meanwhile, Courtney was getting ready for the prom. Julie found a recorded audio of Courtney taking responsibility for Liz's death; at the prom, Zack rigged the audio equipment to play back the recording of Courtney saying, "I killed Liz, I killed the Teen Dream. Deal with it" over and over. Courtney saw Julie was smiling and figured out that she was responsible for her downfall; Julie smirked, blew Courtney a kiss, and mouthed an obscene suggestion before waving to Courtney in a sassy way.

Horrified and angered by her actions, the students turned against Courtney, shouting obscenities and throwing the flowers from their prom suits at her as she attempted to run for the door.  Julie took a picture of Courtney's humiliation and despair.  Her final fate is unknown, but it is assumed that she was arrested for the death of Elizabeth Purr. 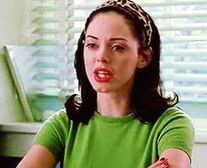 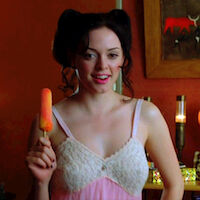 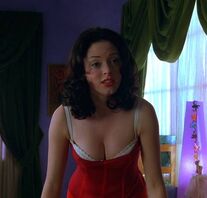 Add a photo to this gallery
Retrieved from "https://femalevillains.fandom.com/wiki/Courtney_Shayne_(Jawbreaker)?oldid=214925"
Community content is available under CC-BY-SA unless otherwise noted.