Courtney Allison, aka Allison Courtney Walker (Sonya Salomaa) was the main villainess from the 2006 Lifetime film, Ties That Bind.

Allison Courtney Walker was an ER nurse with a dark backstory. 20 years before the film's events, Allison's father, a doctor, cheated on her mother with a nurse, and it was reported that Allison's mother killed both of them in a jealous rage. As Allison herself revealed, her mother couldn't hurt a fly, and Allison herself murdered her father and his mistress, stating that they were breaking up their family.

Since then, Allison moved on and took a position as an ER nurse, going by the name Courtney Walker Allison. She later moved into the guest house of doctor and co-worker Dave Geiger and his wife, Megan Mahoney, after seeing an ad at the hospital. At first, Courtney acts friendly to Dave and Megan (especially the latter), but she later reveals her evil and flirtatious personality when she flirts with Dave late one night, posing seductively in pink lingerie. Dave wanted Courtney out of the house from that point on, and while arguing with Megan, the scheming blonde anonymously phoned police regarding a domestic dispute between them.

Having seen Courtney's dark side, Megan banded together with Dave to attempt to evict Courtney, only for the villainess to brashly remind them that they had no legal grounds to evict her. Knowing this, Courtney intentionally antagonized the couple on more than one occasion; including killing a patient (an abusive husband who Courtney encountered earlier) and throwing a wild party outside while Dave and Megan hosted a dinner party for the former's boss. Megan went to Keira for info regarding Courtney's background, which resulted in Keira revealing Courtney's real name and her dark past to Megan. Meanwhile, Courtney continued her seduction of Dave, posing on top of him in bed after drugging and restraining him, an operating camera nearby taping everything. Keira snuck into the guest house and collected evidence of Courtney's tenant violations and later confronted her with a three-day eviction notice. In response, Courtney killed Keira, stabbing her to death and tossing her body into the pool. When Dave and Megan's elderly neighbor came over as Courtney was doing this, Courtney managed to hide Keira's body long enough for the two to walk away together. It was later shown that she also killed the woman to keep her from interfering with her plans.

In the film's climax, Courtney drugged Megan and tied her down on her bed, while revealing her plan to kill both her and Dave and make it appear like a murder-suicide committed by Megan in a jealous rage, with the video of Courtney and Dave being used as Megan's "motive." She later phoned police and again claimed that Dave and Megan were fighting and it was becoming violent, and after making the call, Courtney encountered Dave and fired shots at him. Detective Ben Barlow arrived at the scene, only for the evil blonde to shoot him as well (non-fatally). Courtney again went after Dave, but she was later shot and killed by Megan.

Turning the respiratory system off by pushing a button 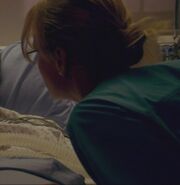 Lecturing him a last time about his behavior while he's suffocating

Although he nodded to what she says in hopes of being spared, she lets him die by suffocation

She appears to be skilled in bondage and well-equipped for it, which will be useful later

She is also skilled in sedating someone by surprise

Explaining to Megan what the official version will be : Megan will kill her husband and then commit suicide

Smiling after stating that Megan will take the blame for her when she will kill Dave, just like her mom did when she killed her father, but with one difference : "you'll be dead"

Courtney getting ready for the next phase of her plan

Courtney is about to shoot a disarmed detective in cold blood

Courtney finally managed to find Dave and is about to shoot him
Add a photo to this gallery
Retrieved from "https://femalevillains.fandom.com/wiki/Courtney_Allison_(Ties_That_Bind)?oldid=183961"
Community content is available under CC-BY-SA unless otherwise noted.