Start a Wiki
watch 01:51
The Loop (TV)
Do you like this video?
Courtney (Angelika Baran) is a minor antagonist in the 2005 episode "Thirst" for the TV series "Smallville".  Angelika Baran is now known as Angelika Libera.

Courtney was a high end member of the Tri-Psi sorority at Metropolis University.  She is the right hand lady of the President of Tri-Psi, Buffy Sanders (Brooke Nevin).

Courtney is first seen in the episode when an unsuspecting pizza delivery boy shows up at the sorority to deliver a pizza.  Much to his wondering eyes, he is greeted by Courtney and two of her sorority sisters at the door, and all of them are wearing bikinis.  They invite him back to the hot tub and they begin making out.  Soon, Courtney goes under the surface of the water and all three of the girls show their fangs and begin biting him.  They are all vampires.

Next we see that Lana Lang (Kristin Kreuk) is forced to pledge Tri-Psi in order to find housing, since she had been accepted to Metropolis University so late.  Buffy and the rest of the girls including Courtney prove to Lana and the rest of the pledges that they are the prettiest and best sorority on campus.

Lana is soon accepted as one of the few into the sorority, and the initiation is that Buffy cuts her own tongue and make Lana drink her blood with a kiss.  Lana is then thrown off of the balcony, breaking her neck, and thus turning her into a vampire.  She is welcomed into the club, and told that she now can live forever.

While doing some digging for her story for Pauline Kahn (Carrie Fisher), Chloe Sullivan (Allison Mack) discovered that none of the girls who joined Tri-Psi left after joining and also that a Smallville girl, Buffy Sanders, had been trapped in a cave full of bats and was rescued by LuthorCorp.

When Clark Kent (Tom Welling) talked to Lex about this, he revealed that kryptonite had been in the cave walls, mutating all animal and plant life in the cave. In the case of the bats, they were vampire bats affected by the kryptonite and bitten Buffy, who was infected with a strange strain of rabies that turned her into a vampire.

Later, Chloe and Clark show up to attend a Tri-Psi Halloween party.  They are met at the door by Courtney, who is dressed in a pink minidress with white go-go boots, and a playboy bunny ears and tail.  Clark is immediately smitten by Courtney, and Chloe does everything to distract Clark and get him back to their quest of finding out where Clark's girlfriend Lana is. Inside the party, Lana is caught by Chloe dancing a little too close with another guy. She confronted Lana about this and Lana bit her, but Clark came to her rescue. Buffy saw that Clark had seen Lana bite into Chloe and threatened to have the sorority feed on Lana unless she brought Clark back to them as a meal. Lana succeeded in doing this by biting into Clark while he was visiting Lex and in the process gained his strength and heat vision.

Later, when the sorority sisters were about to feed on Clark, Lana stopped them, saying that he was not a normal guy and suggested that they turn him instead. This angered Buffy, who faced off with Lana, but Lana promptly incinerated her with a blast of heat vision.  The rest of the girls including Courtney ran away, and it is not learned what if any their fate is. 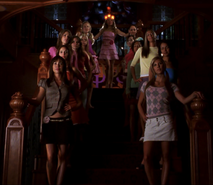 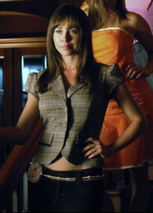 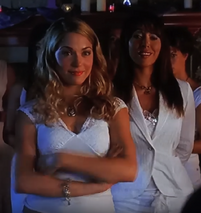 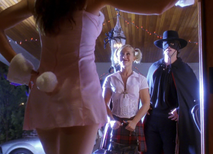 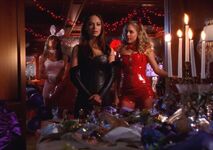 Add a photo to this gallery
Retrieved from "https://femalevillains.fandom.com/wiki/Courtney_(Smallville)?oldid=185019"
Community content is available under CC-BY-SA unless otherwise noted.