Countess Zanda (France Zobda) was the villainess from the 1984 movie "Sheena".

Countess Zanda was formerly the betrothed of King Jabalani (Clifton Jones) and is now the arm-candy of Prince Otwani (Trevor Thomas). Zanda boasted of being "the most wicked woman in Tigora", and it was her idea to Frame the Zambuli shaman for Jabalani's assassination.

Zanda is a fiercely jealous person, and following the capture of Sheena Queen of the Jungle (Tanya Roberts), Zanda bristles when she notices her boyfriend's rather obvious sexual attraction to his captive foe.

Zanda decides to eliminate the competition, as well as soften up the Zamboulis for invasion by Otwani's mercenary army. She puts Sheena into the Black Berets mercenaries' helicopter gunship and instructs Joe (Tim Ward-Booth), the pilot to fly over Sheena's village and get the attention of the tribe, then lead them to a nearby waterfall where Zanda intends to shove Sheena out to her death on the rocks below.

Since Sheena is the protector of the Zamboulis, this would be, needless to say, severely demoralizing for them. But Zanda failed to count on Sheena's ability to make telepathic contact with animals. Under the pretense that the helicopter's engines are giving her a headache, she concentrates hard and summons a flock of flamingoes from the nearby "Lake of Birds," who swarm the helicopter and peck viciously at Zanda and the pilot.

The pilot, too busy trying to fend off the avian marauders, isn't really flying the helicopter and so Hawk One tips too far to one side, dumping Zanda out before she has a chance to grab onto anything. She screams as she plunges down into the waterfall, dying precisely the same death she had intended for Sheena. 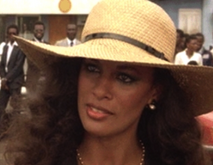 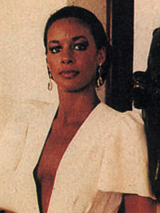 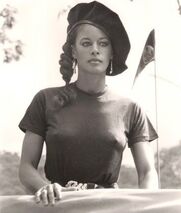 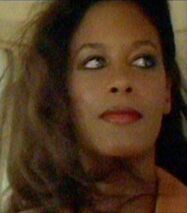 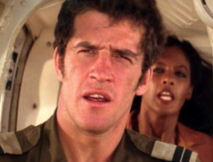 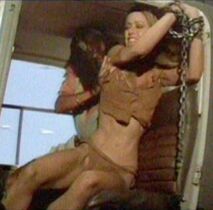 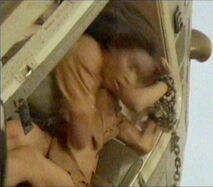 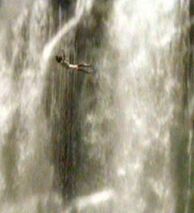 Gorgeous villianess!!
Add a photo to this gallery
Retrieved from "https://femalevillains.fandom.com/wiki/Countess_Zanda_(Sheena)?oldid=144360"
Community content is available under CC-BY-SA unless otherwise noted.