Start a Wiki
watch 01:48
The Loop (TV)
Do you like this video?
Countess Von Dix, played by Catherine Schell, is the villainess in the 1993 romantic comedy ‘Pretty Princess’. Countess Von Dix and her villainous husband, the Count, are determined to seize the crown of the fictional principality of Liechtenhaus from the Countess’s brother, Prince Max. The Count tries to convince the Prince to sell the royal palace to American developers in order mend the principality’s finances. However, the Prince plans to have his elder daughter, the pretty princess, married to an unattractive but wealthy foreign royal. The Countess and her husband have the princess kidnapped in order to force the deal, leaving the prince no alternative. However, their plan is foiled by a lover the princess had met in a foray out of the palace, as he rescues the princess. The hero is himself arrested in the palace, however, as he is mistaken for the man who kidnapped the princess. Things are set right when the princess's younger sister helps the secret lover escape, as he is given the chance to explain himself to the prince, and to tell the Prince that the Countess and her husband are behind the kidnapping, as he had seen her on the scene. The Count and the Countess’s plan is therefore exposed, and they are driven away from the marriage ceremony planned for the princess and the foreign monarch. The Countess is frightened as the they are found out, but leaves head held high at the prompting of her husband, whom she follows. Here the princess ditches the monarch and marries the hero. 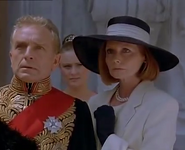 Add a photo to this gallery
Retrieved from "https://femalevillains.fandom.com/wiki/Countess_Von_Dix_(Pretty_Princess)?oldid=171623"
Community content is available under CC-BY-SA unless otherwise noted.