Larissa Diaz, aka Copperhead, was one of the eight assassins who was hired by Black Mask (The Joker in disguise) to kill Batman for fifty million dollars on Christmas Eve.

Prior to her arrival in Gotham City, Copperhead underwent fourteen escapes from prison. She also got tattoos that suggested a connection to a Central American gang.

She arrived in Gotham and ended up captured and placed in interrogation. Copperhead managed to escape her overconfident interrogator, and broke his neck with her legs when he tried to call for help, before she received an envelope that requested the hit on Batman.

At some point during her contracted status, Copperhead had managed to deduce that her "employer" had actually been impersonated by the Joker.

While he searched for Black Mask at the Steel Mill, Batman encounters one of Joker's Henchmen dying inside the elevator shaft. After he Scanned his body, Batman discovered that he was killed by poisons inside his body. While Batman interrogated Black Mask, Copperhead attacked him, poisoned him with her claws, said he was already dying slowly and left.

Batman scanned the poison and had Alfred synthesize a cure. While he went to ground level, Batman had hallucinations of Alfred, the Gotham Merchant's Bank Manager and Commissioner Loeb. Batman then encountered and fought multiple hallucinations of Copperhead. Batman ultimately defeated the real Copperhead, and the cure arrived, which cured the poison inside him, although she told him that the poison ultimately will reside in his veins for as long as the Dark Knight lived, which she arrogantly claimed won't be very long.

Batman took down Copperhead who told him that Joker was having a meeting with the remaining assassins. Copperhead told Batman to let her go and that she'd tell him where they were, but he already knew how to track them, told her: "I owe you one" and locked her in a shipping crate.

Batman then told Alfred to leave an anonymous tip at the GCPD, which told them to look in the shipping crates at the Steel Mill. 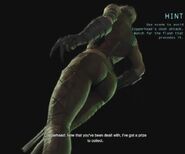 Retrieved from "https://femalevillains.fandom.com/wiki/Copperhead_(Batman:_Arkham_Origins)?oldid=167328"
Community content is available under CC-BY-SA unless otherwise noted.