The Contessa is a major recurring antagonist exclusive to the game show Where in the World is Carmen Sandiego.

Contessa is a wealthy and prosperous aristocrat who doubles as a thief and international criminal under Carmen Sandiego's notorious V.I.L.E.organization, usually summoned by her boss to steal high-class loot or priceless antiques and/or buildings, although sometimes she may vary by stealing something else (although it usually has to do with fashion or wealth). To conduct her heists, she makes use of several different methods which only a large amount of money would acquire, such as powerful helicopters capable of yanking entire constructions off the ground, or huge amounts of catnip to attract every cheetah in Namibia. However, like with every other villain in the show, she is finally apprehended at the end of the game by one of the Gumshoes and sent straight to jail.

The Contessa is a fashion-obsessed socialite with an unspecified European accent (it is hinted to be Italian in a few episodes) who sees stealing as just another high-society sport. She is also shown to be quite intimate, solicitous, confidential, and authoritative towards Carmen herself (calling her "darling", much to Carmen's irritation), and is always gleeful to steal something new, especially if it involves money or feeding her own ego, which is already quite big. She is also quite trustworthy and fearless when conducting her heists, and governmental limits are not a problem to her, as she once managed to steal the White House itself by ripping it off its supports, only to pretend to be the "First Lady of Crime" and have it remodeled after her image, doing the same to Argentina's "Casa Rosada" at one point. Naturally, she detests prison and any contact with nature, as she hates getting dirty. 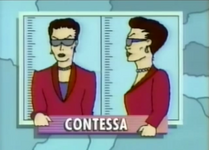 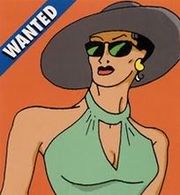 Add a photo to this gallery
Retrieved from "https://femalevillains.fandom.com/wiki/Contessa_(Where_In_The_World_Is_Carmen_Sandiego%3F)?oldid=193718"
Community content is available under CC-BY-SA unless otherwise noted.