The Female Villains Wiki
Register
Don't have an account?
Sign In
in: 1960s, Barefoot, Boots,
and 14 more

Commissar Malenska (It Takes a Thief)

Commissar Malenska (Marti Stevens) is the main antagonist in the 1968 episode "Locked in the Cradle of the Keep" for the TV series "It Takes a Thief".

Alexander Mundy (Robert Wagner) stages a defection into the Eastern Bloc in order to steal an item he does not know about yet. In the airport he meets up with Ilsa (Celeste Yarnall) who is his contact, and is introduced to Commissar Melenska, who is in charge of Internal Security. She reads a statement to the press and onlookers on Mundy's defection and renunciation of his capitalistic and imperialistic native land.

Commissar Malenska is cautious about Alexander and expresses this suspicion with Boris (Joseph Bernard). She orders Boris to watch him.

Malenska appears once again at a museum while Mundy and Ilsa are admiring their target a very large diamond. She shows him around pointing out the security detail, with emphasis on the automatic machine gun turrets in the courtyard that are trained to eliminate any intruders. In addition she tells him about the security door that automatically logs in everyone who enters.

Malenska later detects Alexander and Ilsa have broken into the museum. While there Mundy uncovers a book with information related to the blackmail of key political and military officials that Malenska and her comrades have been doing.

In order to lure Malenska in after them, he pretends to steal the diamond. Malenska arrives at the museum and notices the broken glass and missing diamond. She is knocked out from behind by Mundy, and they steal her shoes as well. Mundy then has Ilsa put on Malenska's shoes. He then plants the diamond on Malenska's body.

When Malenska is discovered by Boris, he sees the diamond by her side. He accuses her of attempting to steal the diamond for herself, and has her hat bay with his gun. Malenska sees Ilsa carrying Mundy on her back out the door, so she distracts Boris, and then knocks him out.

As stated earlier, the door security monitors everyone's shoes on the way in and out of the museum, by wearing Malenska's shoes, they can slip out undetected as an intruder. All Mundy does is have Ilsa carry him on her shoulders over the threshold of the door.

Malenska runs barefoot out the door after the two spies, tripping the security door. Out in the courtyard, the lights come on. As she looks up with the shock of impending doom on her face, the machine guns open up on her and she is mowed down. 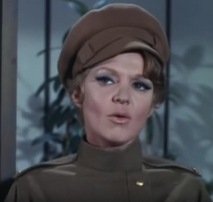 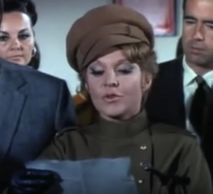 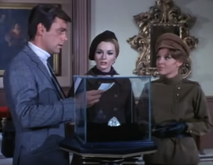 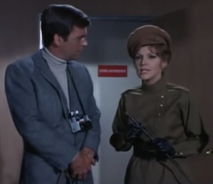 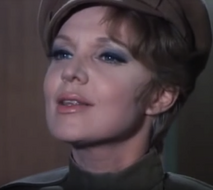 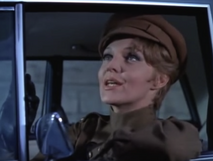 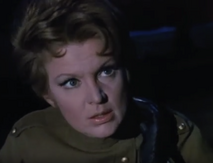