Start a Wiki
watch 01:48
The Loop (TV)
Do you like this video?
Colleen Simms (Genelle Williams) is a villainess from "Multitasking", episode 4.08 of Republic of Doyle (airdate March 24, 2013). She was a woman who approached Jake Doyle with an interest in hiring him as a private investigator. During their initial meeting, Colleen claimed to be clairvoyant and that her powers allowed her to see that someone was stalking her, hiring Jake to watch her house for him.

But in actuality, Colleen's flighty and delusional demeanor was a cover for her true identity as a hired assassin. Colleen had been hired by law firm Jackman & Drake to kill Judge Allison Jenkins, as the firm was attempting to cover up misappropriation of funds within their practice. Colleen went about finding information on Allison by stealing the files of lawyer Walter McLean, seducing him at a strip club before taking the files before leaving him in a noose.

Colleen's villainous reveal came when she arrived at Jake's office while Des Courtney was watching after Allison alone, her having come to Jake for help after learning someone was trying to kill her. As Des answered the door, his tablet began erratically beeping as a result of the tracking device planted on Colleen being within range, serving as Colleen's reveal as the thief. After kicking Des in the face, Colleen demanded to know where Allison was, threatening to kill Des if he didn't tell her. While Des was initially uncooperative, Colleen eventually heard Allison in the bathroom and went to get her, taking her hostage off-screen.

Colleen later confronted Jake and Kyla MacRury (a reporter following Jake in hopes of writing an article over him) at the Duke of Duckworth bar, holding Allison at knifepoint and boasting that Jake helped her track Allison down. Before Colleen could make off with Allison, however, Jake reminded Allison of a defense move he taught Allison on one of their dates when they were a couple, allowing her to escape Colleen's clutches. Colleen then got into an altercation with Kyla, who was eventually able to subdue the villainess. When questioned later while handcuffed to the bar, Colleen (in exchange for a deal and police protection) confessed to being hired by Jackman & Drake, while also stating that she didn't know their reason for wanting Allison dead. Colleen was later taken (off-screen) by Des to the RNC, where she was placed under arrest. 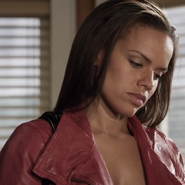 Colleen subdued by Kyla
Add a photo to this gallery
Retrieved from "https://femalevillains.fandom.com/wiki/Colleen_Simms_(Republic_of_Doyle)?oldid=133856"
Community content is available under CC-BY-SA unless otherwise noted.