Colleen's backstory revealed that she was actually a young mother, becoming pregnant shortly after marrying her high school sweetheart. She gave birth to a daughter named Melanie, though Colleen's marriage took a turn when Melanie's father cheated on her. Sometime in 1983, Colleen killed her husband during a trip to the Grand Canyon, and while she faced various questions and suspicion regarding her husband's disappearance, she avoided arrest due to lack of proof. It was after killing her husband that Colleen gave up Melanie for adoption.

In the years that passed, Colleen had been obsessed with finding the perfect family, often inserting herself into various families and killing those who didn't meet her perfect standards. The film's beginning established Colleen as a deranged serial killer, as she was shown serving dinner to her family while criticizing them one-by-one, with the scene revealing they were all killed by Colleen. The deranged madwoman found her new target in the form of main protagonist Samantha Kirkpatrick, whose mother, Leslie Schulman, had passed away, and she later introduced herself to Samantha as Leslie's long lost biological mother. Samantha was elated over learning that she was meeting her maternal grandmother for the first time, and afterwards, Colleen snuck into the funeral home to look into Leslie's file, only for Mrs. Wicker--who ran the home--to return her office, leading to Colleen killing Mrs. Wicker afterwards.

Colleen continued charming Samantha and spending time with her, which included sneaking into the bathroom and getting Samantha's urine sample--which revealed that she was pregnant. She later acted surprised when Samantha informed her best friend, Aimee, about her pregnancy, while secretly adding Samantha's baby (later revealed as a girl) to her delusional goal. Colleen was also revealed as having multiple personalities, as she was shown clashing with her sinister reflection while she was spying on Samantha and her husband, Brad Kirkpatrick, before she was encountered by Todd (Brad's best friend and co-worker). Todd asked Colleen about her presence in front of the house, with Colleen claiming that she was planning to surprise them before killing Todd with one of her knitting needles.

Aimee began to become suspicious of Colleen, who overheard Aimee and Samantha conversing about her, leaving Colleen to claim Aimee as an obstacle. Afterwards, Aimee asked Jill--who worked at an adoption agency--to look into Colleen, and she later confronted Colleen with what she discovered, which included an incident in 1983. Colleen closed the garage door and addressed Aimee before bludgeoning her with her teapot. The maniacal villainess was set to place Aimee's body inside the trunk of her car, but after seeing that Aimee was still alive, the evil Colleen strangled her to death with a curtain cord.

The film's climax saw Colleen attack and drug Brad, as he was another obstacle in her plans involving Samantha and her unborn daughter. As for Samantha, she began to realize that Colleen was an impostor, mainly after noticing that Colleen built a nursery in her own home and seeing Aimee's phone in her drawer. Samantha answered Aimee's phone and ended up talking to Jill, who revealed, among other things, that Leslie's actual mother (Samantha's real grandmother) died while giving birth to Leslie. She also learned the identity of Colleen's actual daughter, Melanie Goodwin, but her attempts to get Melanie to help her regarding Samantha were met with disbelief.

Samantha returned home and was encountered by Colleen, who chloroformed her and revealed her plans to raise both Samantha and her daughter as her own perfect family, while also admitting to killing Todd and Aimee, claiming they were bad for the baby. Samantha broke free from her capture and brawled with Colleen, with Melanie later arriving and assisting Samantha against her twisted biological mother. The malevolent psychopath made an attempt to kill Melanie, only for Samantha to strike Colleen with a teapot, after which she was handcuffed to a stretcher and arrested, while waving to Samantha and telling her that she would see her soon. The film's final scenes showed Colleen under her therapist's care, with the villainess commenting on his family and giving a fiendish smirk afterwards. 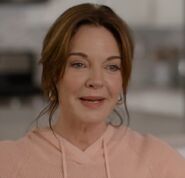 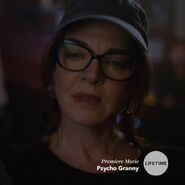 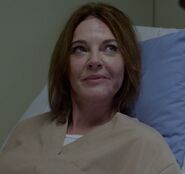 Add a photo to this gallery
Retrieved from "https://femalevillains.fandom.com/wiki/Colleen_Barton_(Psycho_Granny)?oldid=170461"
Community content is available under CC-BY-SA unless otherwise noted.