Start a Wiki
watch 01:48
The Loop (TV)
Do you like this video?
Col. Lauren Haley (April Parker-Jones) is a recurring villainess from Season Four of Supergirl.

Col. Lauren Haley is the supervisor to Alex Danvers at the DEO, and it was in the episode, "Ahimsa," that Haley was introduced in her new position. The following episode, "Paradise Lost," revealed Haley's anti-alien sentiment, as she voiced her views to Alex by blasting the DEO for allowing J'onn Jonzz to work within the agency. She even began antagonizing Supergirl beginning in the episode, "Call to Action," when she reprimanded her for intervening in an attack orchestrated by the Children of Liberty.

Episode 4.08, "Bunker Hill," ended with Supergirl fired by the DEO due to her refusal to reveal her secret identity, and it was in the midseason premiere, "Suspicious Minds," that Haley began her quest to find out Supergirl's identity. Haley's mission started after Supergirl responded to an attack on Navy ship, with Haley blasting Supergirl for appearing on DEO territory and blaming her for a shimmering alien getting away, despite saving a Navy SEAL from the aforementioned alien. Haley interrogated the rest of the DEO in her quest, after Alex gathered the ones who knew about Supergirl being Kara Danvers and warned them about the interviews.

All the while, the investigation revealed that Col. McCallister, the murdered SEAL on the ship, was involved in Project Morae, a session where the Morae (an alien race) were being tortured into becoming assassins for the government, only for the SEALs to be ordered to terminate the race after the POTUS ordered them to cut ties with the Morae. One of the conspirators in the session was Haley, and after learning this, Alex confronted her boss, only for Haley to defend her actions and show no remorse due to the fact that the Morae weren't human.  In preparation for the attack on the Morae, Haley ordered the DEO to use actual guns instead of the modified paintball guns concocted by Brainy, rescinding a longstanding DEO ban on lethal force.

Alex's indignation with Haley's budding heel persona had her nearly wanting to quit, only for Kara to convince her to stay so she could keep Haley in check. Shortly afterwards, Alex found out that one of the agents broke down and revealed Supergirl's identity to Haley, who boasted about her newfound knowledge and blasted Alex for keeping her sister's secret. During the attack, Haley is dragged by one of the aliens, but is saved by Supergirl. Instead of expressing gratitude, however, Haley turned heel and announced that she knew Supergirl's identity, and intended to recommend Supergirl be conscripted back into the DEO, placing herself in command over Alex. In addition, the evil Haley threatened to reveal Supergirl's identity as Kara to her enemies unless Supergirl obeyed her orders without question. Alex decked her villainous boss, knocking her out. Haley's memories regarding Supergirl's identity were removed by J'onn Jonzz, but the final scenes had the villainess acquiring a Vertullarian--a Truth Seeker--in her quest to discover Supergirl's identity. 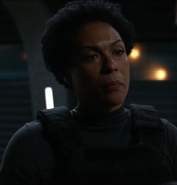 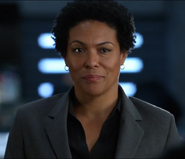 Add a photo to this gallery
Retrieved from "https://femalevillains.fandom.com/wiki/Col._Lauren_Haley_(Supergirl)?oldid=147333"
Community content is available under CC-BY-SA unless otherwise noted.