The Female Villains Wiki
Register
Don't have an account?
Sign In
in: 1940s, Animal Weapon, Attempted Murder,
and 14 more

Cobra Queen was the villainess in Daredevil Comics #19 (October 1943).

The Cobra Queen was the ruler of a hidden canyon filled with deadly snakes. Few made it to her palace alive, but those who did usually found themselves prisoners in her dungeon. She kept them here, until she had time to properly torture them, something she not only enjoyed, but had honed into a fine art.

Her men managed to capture a wounded Claw, but had difficulty keeping him restrained. The Cobra Queen suggested that the two of them join forces and they signed a pact to rule the world together. When the Ghost came looking for the Claw, the Cobra Queen managed to get the upper hand on him. 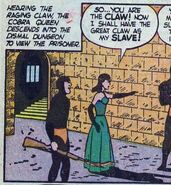 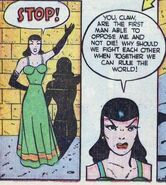 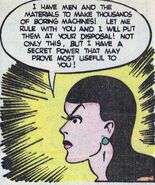 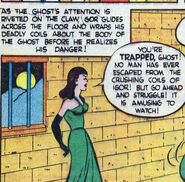 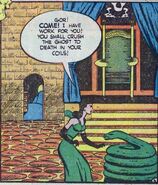