Start a Wiki
watch 01:48
The Loop (TV)
Do you like this video?
Cleo Moore (Danielle Rayne) is a minor antagonist in the 2012 episode "Operation: Have Silencer, Will Travel" (episode 25) for the action comedy web series "The Adventures of Superseven".

Cleo Moore is a henchwoman for The Fez (Glenn Takakjan).  At the beginning of the episode, we see her dressed in a purple top and black pants with silver thigh high boots, as she paces back and forth in a park.  It is obvious that she and The Fez are waiting for someone, and they are late for the rendezvous.  Superseven (Jerry Kokich) surprises her from behind and she misses wildly with a kick.  The two exchange punches and she counters by pulling out her pistol on him.  Superseven clogs the end of the gun with his finger and warns her not to pull the trigger or it will blow up in her pretty face.

As Superseven and The Fez meet, Cleo watches from a distance.  The Fez tosses the wad of cash to Cleo and tells her to buy some hollow points,  Superseven asks The Fez which assasin is responsible for killing all the T.H.E.M. agents.  Superseven tells The Fez that he has his suspicions that it is Sandra West and that she is involved with Dr. Diabolical and a secret mind control chip.

Cleo overhears Superseven say Sandra West, and she chimes in that she would like to put a bullet in the bleach blonde head of hers for killing her friend Sasha Banacek .

As Superseven is walking away after the meeting, Cleo yells out to him and says, "Hey Seven, watch your six". 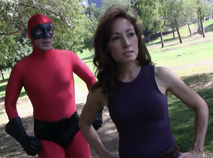 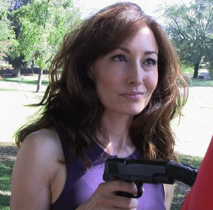 Add a photo to this gallery
Retrieved from "https://femalevillains.fandom.com/wiki/Cleo_Moore_(The_Adventures_of_Superseven)?oldid=150371"
Community content is available under CC-BY-SA unless otherwise noted.