Start a Wiki
watch 01:50
The Loop (TV)
Do you like this video?
Claudia Blaisdel (Brianna Brown) is a recurring villainess from the 2017 Dynasty reboot.

Claudia Blaisdel is an engineer and the wife of fellow engineer Matthew Blaisdel, who performed his duties for Carrington Atlantic. Sometime before the events of the series, Claudia and Matthew were involved in a car accident, which occurred after Claudia found out that Matthew was having an affair with Cristal Flores--who later became engaged (and later married) to Matthew's boss, Blake Carrington. In order to keep Matthew from leaving her, Claudia feigned having a brain injury, which kept Matthew at his wife's side tending to her. She even received medication for her "injury," but she was taking a different drug instead, and she fired her nurse (assumingly) because she was suspecting Claudia's deception.

By the events of the series, Claudia planned her revenge on Matthew, and in the series' pilot, "I Hardly Recognized You," she rigged the Thumper truck, resulting in an explosion at the workplace that killed Matthew. The deranged villainess made countless appearances to the Carringtons loudly accusing them in her husband's death, while covering up her own role. It was revealed in the episode, "Company Slut," that Claudia was pregnant with Matthew's baby, and the episode saw a remorseful Cristal attempt to make amends to Claudia.

The episode ended with Claudia walking away from Cristal (who was outside Claudia's home) in a fuming huff, only for Blake to accidentally hit her with his car. The scheming Claudia decided to use the accident to her advantage; not only continuing to fake her injuries from the previous accident, but maneuvering her way into the Carrington home in the following episode, "I Exist Only For Me." As part of Claudia's plan, she attempted to seduce Blake, pretending to "accidentally" encounter him in the bathtub to further her ruse.

Claudia's villainous reveal came slowly in the episode, "A Taste Of Your Own Medicine," beginning with Cristal following up on Claudia's deceptive claim that her nurse was stealing her medication. Cristal later revealed to her nephew, Sam, that the nurse wasn't a thief and Claudia had fired her, all the while unaware that Claudia had been listening in on their conversation. Later on, Claudia turned heel and knocked out Sam with a pistol after luring him to the Carringtons' wine cellar, and later locked Sam and Joseph Anders (the latter being the Carringtons' caretaker) inside. In the episode's climax, the evil Claudia emerged in a stunning dress and held Cristal at gunpoint, completing her reveal as a vengeful villainess.

Blake, Steven, and later Fallon Carrington all ended up held hostage by Claudia, and it was there that her entire scheme was revealed by Fallon. Fallon deduced that Claudia faked the brain injury to keep Matthew with her, but was bewildered as to why she kept the ruse alive after his death. It was there that they realized that Claudia did kill Matthew, and the ruse was kept alive after the murder to avert suspicion; as Steven had stated, no one would suspect a brain-damaged widow. Claudia's profession as an engineer linked her to the murder, with the villainess claiming that her intent was to only hurt Matthew. She revealed that her plan afterwards was to seduce Blake and later kill him so Cristal could experience the same pain that Claudia herself felt, and after this, Fallon managed to talk Claudia down and convince her to lower her weapon, but she was set on firing when she heard Anders firing a shotgun. The Carringtons wrestled the gun from Claudia's possession, and she ended up placed in a sanitarium.

Claudia resurfaced in the season's penultimate episode, "Trashy Little Tramp," as she was approached by Fallon regarding information Matthew had on Clark County, as she was helping Michael Culhane. Claudia gave her information on the documents, and in a twist at the end of the episode, she was shown conversing with Matthew, believed to have died. The episode ended with Matthew stating that he had his own plan for revenge on Blake, and that the couple was working together in the plot.

In the season finale, "Dead Scratch," Claudia escaped due to tricking one of the doctors into believing that her water was breaking. She and Matthew headed to the Carrington home, where they planned to expose Blake after Steven's wedding to Sam, only for Claudia to become enraged over Matthew wanting to protect Cristal, leaving her to believe that he still had feelings for her. Claudia decided that the only way to keep Matthew with her for good was to kill Cristal, and it was in the episode's climax that the deranged villainess carried out her plan; confronting Cristal at gunpoint in the wine cellar. Cristal, having wanted out of her marriage to Blake, stated to Claudia that Blake was to blame for how she ended up, and she urged Claudia to help her confront Blake in front of the press.

However, after seeing Matthew enter, Claudia's rage returned as she screamed at her husband in front of a bewildered Cristal. Claudia shot at Matthew, but in yet another twist, her shot actually struck Cristal, meaning that Matthew truly was deceased and that he was a figment of Claudia's deranged mind. Claudia left the scene after shooting Cristal, and she later hot wired a car and made her escape. 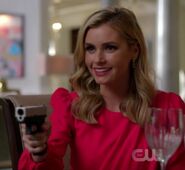 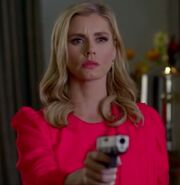 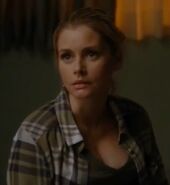 Add a photo to this gallery
Retrieved from "https://femalevillains.fandom.com/wiki/Claudia_Blaisdel_(Dynasty)?oldid=204112"
Community content is available under CC-BY-SA unless otherwise noted.