Start a Wiki
watch 01:48
The Loop (TV)
Do you like this video?
Claudia (Kathleen Turner) is the villainous witch in the 1997 fantasy comedy movie "A Simple Wish".

Claudia is a former fairy godmother who turned later into an evil witch who wants all the powers of her fellow fairy godmothers for herself.  She searches for her mystical fairy wand which if imbued with more fairy magic, would make her unstoppable.

Claudia is selfish and power-hungry, who uses her magic more for her own selfish purposes rather than granting peoples' wishes.  Because of this, Hortence, the Queen of the Fairy Godmothers (Ruby Dee), took her wand away and fired her.  As a result, Claudia fell to the dark side completely and became an evil witch.

After full mastering dark magic, Claudia showed up at a formal fairy godmother party one night determined to get her wand back.  After she first tricked Rena (Teri Garr), a receptionist into eating a Snow White's stepmother and witch's red apple, putting her to sleep, Hortence arrived and ordered Claudia to leave.  Claudia refused and unexpectedly cast a spell that turned the head fairy into a paper-thin, two dimensional version of herself.  The spell rendered Hortence completely powerless, leaving Claudia free to stuff Hortence's mouth with bricks and steal all the checked wands from her office.  Claudia escaped with her accomplice Boots (Amanda Plummer), her pet dog that she had turned into a human, believing she had all the wands.  However, she was missing Murray's wand, which was not turned in because he missed the meeting.

The following day, Annabel (Mara Wilson) realized that Murray (Martin Short) had left his magic wand behind and decided to return it to him.  However, Charlie (Francis Capra) broke it.  She tried to fix it during art class, but failed.  She then ran out of class and hid when her teacher tried to confiscate the wand, but unexpectedly met Murray.  The two disappear to Nebraska, by way of a misconstrued spell cast by him to get out quickly.  After he tried and failed to turn a selfish motel owner then met there into a giant rabbit (turning him into a 50-foot tall rabbi, instead.  The two ended up back in Central Park.  Because of them disappearing in an unexplained way, the school closed early.  Charlie found them.  Annabel then begged Murray to try to grant her wish now that they were close to her father, but due to yet another mishap by him, Oliver was turned into a statue, Duchess into a mouse, and his carriage into a pumpkin.  To fix the problem, the three of them went to NAFGA and asked for the help of Hortence.  When they arrived, they found her, still under the effects of Claudia's spell.  Murray attempted and succeeded at blasting away the bricks lodged in her mouth.  She told them of Claudia's plot and explained that the awry spell must be lifted before midnight, or Oliver would be doomed to remain a statue forever.  Claudia meanwhile had been looking through the wands, searching for hers.  After going through them, she realized it was missing and now belonged to Murray.

Annabel and Murray headed to the theater and saw Tony Sable, the selfish and conceited actor who was auditioning for Oliver's part.  Knowing this could ruin her father's chance of being in the show, she asked Murray to sabotage the audition any way he could.  First he tried to make it rain on the stage.  However, it was dismissed as a simple technical problem and the audition continued.  Then she asked him to give Sable a frog in his throat to impair his singing.  He took this wish too literally, and frogs started hopping out of Sable's mouth, shocking the cast and crew.  Annabel and Murray celebrated but Sable got the part since Oliver had not show up.  Botts, who had been looking for Murray, found them.  Murray mentioned the story of Brer Rabbit to Annabel and they begged her not to take them to Claudia's lair so she would.  Boots tricked and kidnapped them, with Charlie following not too far behind with Murray's wand.

Claudia caught them, and demanded them to tell her where her wand was.  She told Annabel that she would make all her wishes come true.  When she refused to tell her, as punishment, she changed her and Murray into ballerinas and made them dance uncontrollably.  She composed the music and made it go faster and faster until Annabel agreed to tell her.  After a fight over the possession of the wand, Claudia won.  However, Boots stole it back and gave it to Murray.  Out of spite, Claudia turned her back into a dog, then attempted to cast a spell on Murray.  However, instead the spell rebounded on a mirror, drawing her into it.  Her struggles to escape caused the mirror to fall down, shattering into a tiny pieces.  Claudia presumably remained trapped behind the mirror forever. 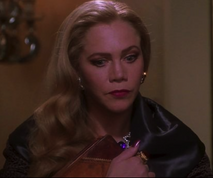 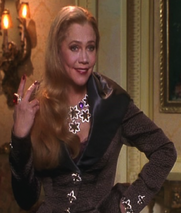 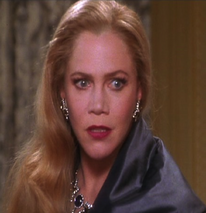 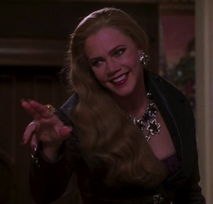 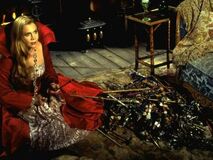 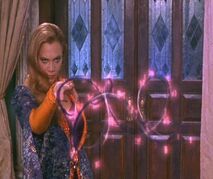 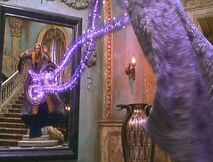 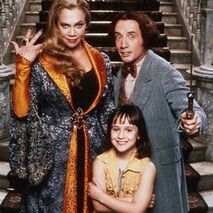 Add a photo to this gallery
Retrieved from "https://femalevillains.fandom.com/wiki/Claudia_(A_Simple_Wish)?oldid=205556"
Community content is available under CC-BY-SA unless otherwise noted.