Claire (Monica Van Campen) is a villainess from the 2000 American English-language Spanish horror film Faust: Love Of The Damned.  The film is a comic book adaptation of the Avatar Press series of the same name.

Claire double crosses the main villain Mephistopheles, who is known as M (Andrew Divoff), and who had magic powers. His touch makes her ejaculate and her breast expand. It gets strange when this beautiful villaness is turned into a lactating blob. Thankfully it was just a punishment and she is returned to her beautiful body, with a warning not to betray him again.

Claire dies after M magically pulls a large snake out of her stomach while she's tied to a cross during a satanic ritual.  Her body spontaneously combusts and vanishes shortly after her death. 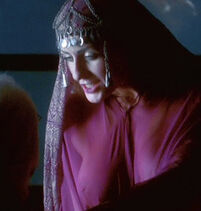 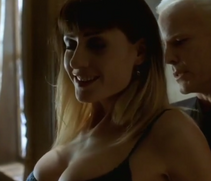 Add a photo to this gallery
Retrieved from "https://femalevillains.fandom.com/wiki/Claire_(Faust:_Love_Of_The_Damned)?oldid=204927"
Community content is available under CC-BY-SA unless otherwise noted.