Start a Wiki
watch 04:10
The Loop (TV)
Do you like this video?
Ciss Dacre (Anna Chancellor) is the villainess of episode 8.04 of BBC's Death in Paradise (airdate January 31, 2019). She was the sister of Benedict Dacre, the owner of coffee empire Paradise Skies, as well as the mother of Owen Dacre. The rest of the Dacre family consisted of Benedict's daughter and Ciss' niece Ruth, and Benedict's new wife and Ruth's stepmother Ricki.

The episode's opening revealed that Ciss' relationship with Benedict was tense, with Ciss chiding Benedict for his callous treatment of their employees and Benedict referring to Ciss by her degrading nickname, "Squeak". Ciss later appeared shocked by Benedict announcing he intended to sell Paradise Skies, telling Benedict that their father would be disappointed in his decision and later going to bed early under the claim of having a migraine.

Ciss and the rest of the Dacre family later found Benedict dead in the pool after hearing a gunshot, with Ciss appearing horrified by her brother's death. As DI Jack Mooney began his investigation, however, security footage seemed to show Ciss heading to the pool armed holding a gun (a family heirloom belonging to Benedict) just a few minutes before Benedict was shot. Upon being arrested and questioned by Jack, however, Ciss proclaimed she hadn't killed Benedict and revealed her alibi for the murder: she was at the bungalow of the Dacres' housekeeper Josephine Porter, who was also Ciss' secret lover. Further investigation began to indicate that Ricki was the true killer, as a robe identical to Ciss' and a brunette wig bought with Ricki's credit card was found in the pool pump basket and her history revealed that two of her previous husbands (both also wealthy) died of heart attacks.

But later on, Jack uncovered the truth: Ciss had in fact killed Benedict, and set up an elaborate ruse to frame Ricki as a murderess attempting to frame Ciss for her husband's murder. To do so, Ciss claimed to be retiring to be early before going out to the pool, under the pretense of apologizing to Benedict. When Benedict turned his back to her, however, the evil Ciss took her gun and shot her brother dead, using one of his thick history books to muffle the sound.

Afterwards, Ciss went about framing Ricki by walking in front of the security camera with gun in hand disguised as herself, wearing fake nails in the same color as Ricki's and the wig she bought with Ricki's credit card to make it appear it were Ricki disguised as Ciss. After hiding her disguise in the pool basket so the chlorine would destroy her DNA and replacing Benedict's history book inside, Ciss went to Josephine's bungalow to establish her alibi, flushing her false nails down the toilet and firing another shot out the window, allowing her family and Josephine to believe it was the shot that killed Benedict.

After gathering the suspects together at the Dacre house, Jack confronted Ciss on her machinations against Ricki, and revealed how her scheme was uncovered: she forgot to put a bookmark in the book she left at the pool, and officer J.P. Hooper found the bullet Ciss fired from Josephine's bathroom window. Jack also revealed Ciss' motivation for killing her brother: she had always resented Benedict owning Paradise Skies and was looking forward to the company being left to Owen, resorting to murder when she learned Benedict planned to sell the company to both retain Owen's claim to the business and allow her and Josephine to be open with their relationship. Cornered, Ciss boldly confessed to her brother's murder (much to Owen's shock) and boasted that despite being caught, she still won by getting what she wanted: Owen becoming the head of Paradise Skies. After sharing a final embrace with Josephine and asking her to take care of the company and her family, Ciss submitted herself to arrest and was taken into custody. 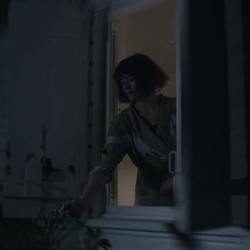 Ciss firing her gun again to establish her alibi 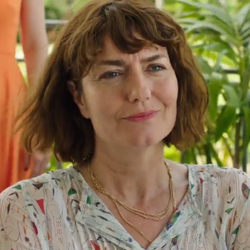 Ciss' smirk during her villainous reveal
Add a photo to this gallery
Retrieved from "https://femalevillains.fandom.com/wiki/Ciss_Dacre_(Death_in_Paradise)?oldid=154446"
Community content is available under CC-BY-SA unless otherwise noted.