A pretty, large eyed blonde woman in her late 20s.

Circe says she thinks her first name affected her character. She has a rather childish, playful, flighty, vain, and generally eccentric manner (Fenton Grenville says she "works hard at being a character") but is clever, and utterly ruthless. She seems to be a thrill seeker and there are hints in the episode that she's somewhat sadistic. She has a very high IQ, "nearly a genius" (she says) and was made to leave medical school. The deadly phosphor bombs are Circe's invention. She thought up how they could be utilized. Circe tells Steed she spends all her money on changing her nose with plastic surgery, never being satisfied with it!

The cultured, well bred villain Fenton Grenville (Tom Adams) and his trio of helpers take over the country home of a wealthy couple, the Bassetts, intending to use it as a base from which they will fire a missile, blowing up a conference of foreign ministers which is being held nearby. The gang's hostages are controlled by deadly phosphor bombs planted by Circe in their necks, which are set off by flicking a cigarette lighter. Manservant Sergeant Groom is killed by a bomb when he tries to escape. John Steed joins the couple (they are very old friends) for a celebration, unaware that the Bassett's "guests" are actually dangerous criminals - Steed soon finds his own life in peril.

Tara King is captured by the gang when she comes to see Steed. Circe prepares to operate on her, intending planting one of the phosphor bombs in her neck too. But Tara tricks Circe into thinking she's been anesthetized - jumping up she takes on Circe, landing a punch to the villainesses face, sending her flying - knocked out. Tara then joins Steed and they foil the villain's murderous missile launch just in time, defeating the rest of the gang. We can assume Circe and the others are later arrested, though this isn't shown.

The motivation for Grenville's attempt to assassinate the foreign ministers at the meeting is never disclosed. He may be simply a hired assassin, or acting for his own political reasons. It seems unlikely that Grenville and his gang are themselves foreign agents. 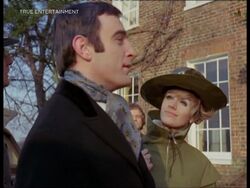 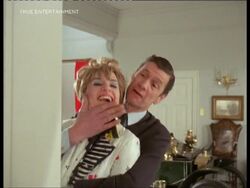 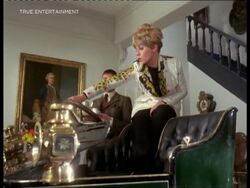 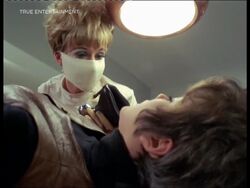 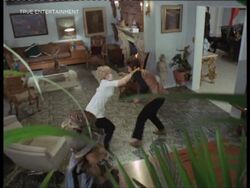 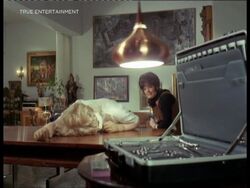 Tara fights and defeats Circe
Add a photo to this gallery
Retrieved from "https://femalevillains.fandom.com/wiki/Circe_Bishop_(The_Avengers)?oldid=160508"
Community content is available under CC-BY-SA unless otherwise noted.