Chutney Windham (Linda Cardellini) is the hidden villainess of the 2001 comedy film Legally Blonde. Chutney was the daughter of Mr. Windham and the stepdaughter to his young new wife Brooke.

Chutney was enraged by her father's marriage to Brooke, believing her to be a gold digger. Wanting to get rid of her, Chutney waited for Brooke to return home one day with a gun, prepared to shoot her. But instead, she ended up shooting her own father when he walked in instead. A shocked Chutney then began a new plan: frame Brooke for her father's murder, with pool boy Enrique Salvatore as her aid.

Chutney's claims to have walked in on Brooke standing over Mr. Windham's body (when she was really just discovering his corpse herself) stood up initially in court, and she and Enrique also conspired to claim Brooke was having an affair with him. However, those claims were proven false by Elle Woods (the movie's protagonist) when she deduced that Enrique was actually homosexual, which was confirmed when he accidentally admitted to having a boyfriend under cross examination.

Chutney's official villainous reveal as when she was questioned on the stand by Elle herself. When asked about her actions on the day her father was killed, Chutney claimed to have gotten a perm, went home, taken a shower, and then went downstairs to find Brooke and her father's body. Elle, using her knowledge of hair products, determined that Chutney was lying about taking a shower, as the water would've ruined her perm. Now cornered, Chutney began to break down and, when accused by Elle of shooting her father, the villainess loudly confessed to her crime before shouting that she had actually intended to kill Brooke instead. Chutney was promptly arrested for her father's murder, and presumably attempted murder against Brooke and perjury. while Enrique was obviously arrested off screen for perjury and for accesory to murder. 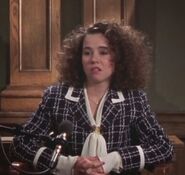 Chutney on the stand

Chutney accidentally reveals herself as a villainess

Chutney, shocked after her confession
Add a photo to this gallery
Retrieved from "https://femalevillains.fandom.com/wiki/Chutney_Windham_(Legally_Blonde)?oldid=198670"
Community content is available under CC-BY-SA unless otherwise noted.