Start a Wiki
watch 01:51
The Loop (TV)
Do you like this video?
Chula (Karen Russell) is a villainess from the 1985 movie Tenement.

She is the sole female member of a sadistic, violent, gang of drug dealers who are terrorising the residents of an apartment complex.

Early in the movie, the police take the gang away after the residents call to complain about them. But the gang manage to hide any trace of their drugs and weapons before the police take them away, meaning there is no evidence to hold them. The residents are shown having a party celebrating the removal of the group of nasty thugs, however they are unaware that the gang are no longer in police custody and are coming back for revenge. For the rest of the movie the gang take over the apartment complex and torment and murder the residents in the most violent and sadistic ways.

Chula mostly stands around and enjoys watching the rest of her gang bully and murder people. She does commit one murder herself though, when a woman tries to escape the building by climbing down from the top floor window with a rope, Chula appears and gleefully cuts the rope, sending the woman falling to her death.

Chula is also involved with the gang's leader, and the two seem to enjoy rubbing blood on each other. After the gang leader gets his hands bloody from a kill, he and Chula go into another room and he rubs her bare breasts with his bloody hands and the two start kissing. In a later scene after finishing killing a resident he rubs blood on her chest again.

Her death comes when she and two other gang members are walking up the stairs in an attempt to kill off the last remaining residents of the apartment complex. What the gang don't realise though is that the residents have set up traps on the upper floor. As Chula climbs the stairs, one man pushes a fridge down the stairs towards her, she looks on in shock as the fridge falls on top of her. Her lifeless corpse is shown moments later, confirming her death.

Karen Russell also played the evil Mohawk in the 1988 movie Phoenix The Warrior/She-Wolves Of The Wasteland. 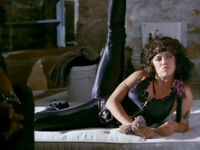 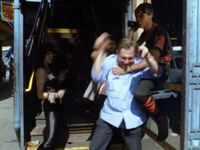 Bullying a man on the street 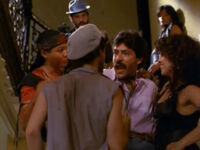 Tormenting a resident, before watching him get murdered 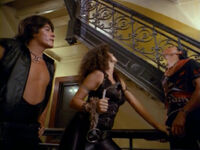 Ascending the stairs to look for more victims 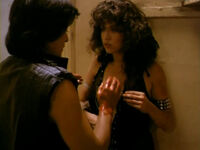 The wicked lovers like to wipe blood on each other 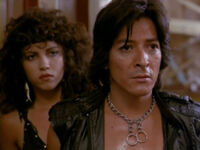 Chula and the gang leader 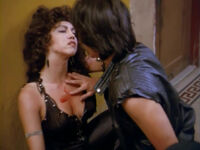 More wiping blood on her chest after killing another resident

The evil Chula gets a fridge pushed on top of her... 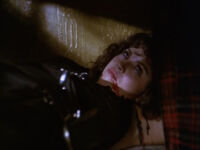 ...and dies
Add a photo to this gallery
Retrieved from "https://femalevillains.fandom.com/wiki/Chula_(Tenement)?oldid=174977"
Community content is available under CC-BY-SA unless otherwise noted.