Start a Wiki
watch 01:51
The Loop (TV)
Do you like this video?
Christine Webb (Shantel VanSanten) is the main protagonist and plot-twist hidden villainess of the 2014 film Something Wicked. She was the daughter of Ellen and Doug Webb and the sister of police officer Bill Webb.

The film's opening also revealed Christine as the girlfriend of James Campbell, with the opening showing the couple at Christine's high school graduation dinner with her parents. It was then that James revealed his desire to marry Christine and start a family, only for Ellen and Doug to agree that they wanted Christine to focus on her education before getting settled down with James, leading to frustration between the four due to the insinuation that Ellen and Doug disapproved of James for not going to college.

Shortly afterwards, James was driving Ellen, Doug, and Christine home when they were involved in an accident when James drove into the path of a train, with Ellen and Doug being killed in the accident. Christine was left devastated by the accident, leading her to move in with Bill and his wife, psychiatrist Susan, while she attended Oregon University. A year after the accident, James proposed to Christine, who eagerly accepted.

The film's events, however, show Christine appearing to be haunted by the spirits of her deceased parents, with her mother (a fan of Shakespeare and poetry) leaving her cryptic Shakespeare quotes that appeared to be warnings to her about danger and both being angry at Christine for agreeing to marry James. Christine's engagement also put her in conflict with Bill, who still despised James for his role in their parents' demise. Christine was also attacked at the school pool when someone shoved her into the water, with the fact that she heard James' cell phone ring when she tried to call him immediately before the attack making Bill believe he was responsible.

Susan, meanwhile, came to believe that Christine's trauma from the year-old accident was causing her to hallucinate, only for Bill to reject his wife's claims as jealousy for Christine preparing to start her own family while they struggled to have children. Ryan Anderson, a classmate of Ryan's and the son of James' boss John, was also suspected of the attack when it was uncovered that he had been left mentally unstable after the death of his mother (with implications being that Ryan killed her in a fit of rage over her wanting him to receive mental health treatment) and that he harbored an obsessive crush on Christine. After Sheriff Ed Young was killed by someone using Bill's stolen police gun at the university while trying to talk with Ryan and John was fatally struck by a truck as he went to meet with Susan regarding Ryan, Susan came to believe Christine was possessed and had developed an evil split personality, only for Bill to disbelieve Susan's claims as delusional.

In the film's climax, following James nearly being killed when someone ran him off the road, the pair decided to go through with getting married, later going to a cabin John left to them for their honeymoon. While there, however, Christine called Bill and asked him to come check the cabin out, claiming she was fearful that her attacker had followed her and James there. Shortly afterwards, James was attacked by a machine gun wielding Ryan, who was revealed to have been stalking James and Christine and having had his younger sister Zeal accompany him as his "partner in crime".

After sending Zeal away, James blasted Ryan for his psychotic behavior, proclaiming that his actions would never result in Christine wanting to be with him. However, at that moment, James was shocked when Christine came over and stood by Ryan, officially revealing herself as his lover/co-conspirator and the mastermind behind all his crimes. Christine went on to ask how terrified James was, revealing in the process her motivation. After the accident, she was given the new phone bought for her by her parents back at the hospital, with the footage recorded by Ellen on it revealing the truth about the accident: James had intentionally driven the car onto the train tracks to kill Ellen and Doug, doing so due to their disapproval of his relationship with Christine. Afterwards, Christine began an affair with Ryan and used his crush to manipulate her into doing his bidding, including (presumably) killing Ed to further their scheme while Christine was implied to have killed John herself.

Cornered, James tearfully apologized for his actions, saying he had believed killing Christine's parents would make things better for them and proclaiming he wished he could undo what he did. Unmoved, Christine took the gun from Ryan and used it to shoot James in the chest, killing him instantly. While placing James' body in the car, a police officer arrived unexpectedly, resulting in the evil Christine killing the man with a single shot to the head. After assuring Ryan that everything would be fine, the illicit couple went inside, where Christine asked Ryan if their "other loose end" had been tied. At that, Ryan assured her that it was, revealing that he had tied Zeal up in his car, indicating the two intended to kill the young girl to cover their tracks.

While it was initially believed by Ryan that their plan was to kill Bill and paint as a psychotic murderer obsessed with his sister to frame him for their crimes, Christine was revealed to have another plan in mind: to set Ryan up to be killed so she could use him as a scapegoat for her crimes. After seeing another Shakespearean quote on the bathroom mirror along with a vision of her deceased mother, Christine called Bill and fearfully claimed her assailant had killed James and was after her before changing into lingerie and seducing Ryan with a knife, eventually engaging in a tryst with him. Upon seeing Bill arrive in his police cruiser, Christine goaded Ryan into choking her, allowing her to make it appear that Ryan were trying to kill her and resulting in Bill shooting Ryan to death. Afterwards, Bill informed Christine that Susan had seen her at the scene of John's murder and said that she'd have to tell him if it was true so he could help her.

In response, the villainess simply stated that Bill was "in a lot of trouble", with Bill later being uncooperative with the police even as they found evidence (including the fact that the gun used to kill James was one Christine stole from him) implicating him in Christine's murders. Meanwhile, Christine sat in the back of an ambulance as a freed Zeal was shown on a stretcher, with Christine staring at her while remembering her referring to her as a loose end. A epilogue card later revealed that Bill ultimately took the fall for Christine and was charged with her crimes, and the film's final scene showed Christine striking and killing Susan and Zeal with Ryan's truck right after it was revealed that Susan adopted her, doing so to fully conceal her status as a vengeful and manipulative murderer. 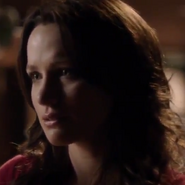 Christine with Ryan as he held James at gunpoint

Christine as she prepared to kill James 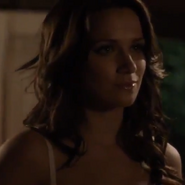 Christine as she seduces Ryan 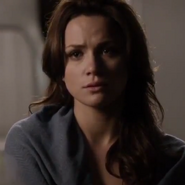 Add a photo to this gallery
Retrieved from "https://femalevillains.fandom.com/wiki/Christine_Webb_(Something_Wicked)?oldid=142323"
Community content is available under CC-BY-SA unless otherwise noted.