View From the Top

To ruin Donna Jensen's life out of jealousy and for stealing Ted Stewart away from her.

Christine Montgomery (Christina Applegate) is the main antagonist in the 2003 comedy film "View From the Top".

Christine was working at a small airport called Sierra Airlines along with her friend Sherry.

They met a girl named Donna Jensen and all three became good friends.

One day a handsome man named Ted Stewart came to meet them and Christine fell in love with him, but he seemed to like Donna more so she went with them as he was giving Donna a ride in his speed boat and tried to impress him, but to no avail which started off her jealousy and resentment of Donna.

Later the two of them move up to the prestigious Royalty Airlines, while Sherry stays in Sierra and Donna aspires to be assigned to the Paris first class route. Christine's jealousy boils over even more at Donna's constant success and seeing her picture up as employee of the month. So she maliciously switches her flight attendant exam with Donna's, resulting in her getting a New York route assignment, while Donna is based in Cleveland.

When Donna discovers that Christine switched the exams and has been stealing from the company, she arranges for an auditor to be placed on her flight, who catches her stealing again. Christine is fired and she confronts Donna who is about to start her job on a plane. Donna tells her how ashamed she was of her betrayal. Christine tells her how she had resented Donna's constant success and hated her for "stealing" Ted away from her and they fight. The security guards suddenly arrive and arrest her, kicking and struggling before she shouts "You know what? You got that fancy uniform and that $40 hair cut, but I see right through you Donna. Right to the inside!" The guards then take her away as she gives a rude gesture to Donna with her finger as she leaves. 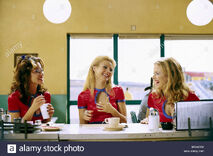 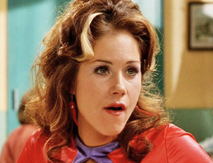 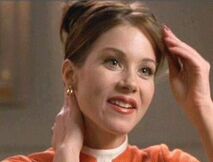 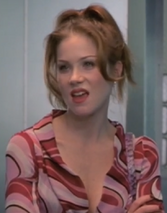 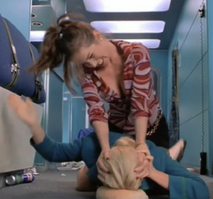 Add a photo to this gallery
​​​​
Retrieved from "https://femalevillains.fandom.com/wiki/Christine_Montgomery_(View_From_the_Top)?oldid=193013"
Community content is available under CC-BY-SA unless otherwise noted.