Start a Wiki
watch 01:48
The Loop (TV)
Do you like this video?
Christine Hartwell (Chloë Sevigny) is the main villainess from "Valentine's Day," episode 13.18 of Law & Order: SVU (airdate April 18, 2012). She is the wife of wealthy Boyd Hartwell, and the mother of their daughter, Madison.

However, Christine is also a serial adulteress, as she has had affairs with four (confirmed) men. Among Christine's illicit lovers were delivery men Brad Hayes and Kevin Fahey, as well as Boyd's business partner, Justin Geld. Fahey was Christine's most recent lover, and after Geld informed the adulteress that Boyd would be arriving home early, Christine devised a plan to extort money from Boyd.

The plan had Christine instructing Fahey to abduct and rape her, with the abduction committed during Christine's Skype chat with Boyd. The couple went to Geld's loft, where they engaged in consensual sex before Christine went to pick up the ransom that Fahey demanded: $250,000. SVU was on the case, and they encountered Christine as she picked up the money. Shortly afterwards, Christine made a false claim that three Black men abducted her, but after evidence was shown that her "kidnapper" was a solitary White man, the villainess fingered Fahey, who was later taken into custody. Fahey gave exact details of his and Christine's plan, but Christine stuck to her story. Even after video of Fahey and Christine having consensual sex was shown, Christine continued to claim that she was raped.

Christine is later arrested and charged with making a false report, and her affairs were brought to light, along with a detail that her fling with Brad ended because he bragged about the relationship. Knowing that she would be convicted, the evil Christine approached a male juror at a stairwell and began seducing him, and when trial resumed, she continued to play the victim; claiming that all of her male lovers were lying about an affair with her--despite clear evidence. Christine's seduction works, as the jury was deadlocked due to the juror voting not guilty. The same result was repeated after Casey Novak's attempt to prove jury tampering failed, and as a result, Christine was a free woman. At the end of the episode, Boyd stood alongside of his wife and defended her "bravery"; while completely oblivious of Christine's adulterous and manipulative demeanor. 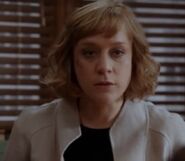 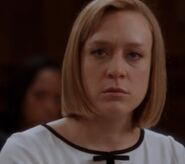 Add a photo to this gallery
Retrieved from "https://femalevillains.fandom.com/wiki/Christine_Hartwell_(Law_%26_Order:_SVU)?oldid=100819"
Community content is available under CC-BY-SA unless otherwise noted.