"You're not even worthy of being my toy."- Christie Christie or (クリスティ) is a professional assassin and She Quan martial artist, who made her first appearance in the 2001 video game titled Dead or Alive 3. She is the only female villain so far, a cold-blooded woman with a sadistic streak, Christie was hired by Victor Donovan to kill Helena Douglas, and she was responsible for the death of Helena’s mother, Maria.

When she does confront Helena, she is stopped by Bayman, who is seeking revenge on Donovan for having ordered a hit on him. Christie commands a clone of Kasumi to defeat Helena, a task that fails. Christie kidnaps CIA agent Irene Lew to lure the ninja Ryu Hyabasa away from his friends Hayate and Ayane.

In Dead or Alive 4 Christie serves as Donovan's bodyguard, but they are unable to prevent the Mugen Tenshin ninja clan (Kasumi, Hayate and Ayane) and Ryu from destroying DOATEC's Tritower headquarters. As the tower is engulfed in flames, Christie finds Helena inside and reveals that she killed Maria. After an inconclusive fight, Christie flees the tower, while Helena is rescued from the building and becomes the new leader of the Dead or Alive tournaments. Christie goes on to continue her work as an assassin for hire, a role she resumes in Dead or Alive Xtreme 2 (2006).

In Dead or Alive 5 (2012), she again serves under Donovan, this time for his new organization MIST.

She visits a DOATEC rig and confronts Rig, giving hints that she knows about his past. At the bar, she encounters Eliot, whom she met during the last tournament. Christie tells him that he has grown up, but that remark makes him nervous. When he asks for milk, she slams a whole gallon, telling him that he needs it for strength. They fight afterwards and Christie is defeated. Later on, Christie spots Helena and Bass and tells the former that she is on a search for a real man. Then they fight and Helena defeats Christie.

When Donovan learns that the ninja plan on infiltrating the rig, he orders Christie to increase the security. There, she is confronted by Bayman, who had his suspicions of the place. They battle, and Christie is defeated by him. When the ninja launch their attack, Christie confronts Kasumi, who has infiltrated the lab to find her brother. The assassin tries to stop her from going any further, but is unsuccessful when the ninja defeats her. It is unknown what exactly happens to Christie afterwards, but she presumably escapes the rig before it is destroyed.

She employs any means necessary to attain her mission objectives, including using her looks, charm, and sex appeal to lure her intended victims, though on occasion she will flirt with her male targets in lieu of killing them.

In her original design, she had a pinkish complexion with darker-colored lips, a heart-shaped face, round eyes, a short and spiky hair style. For her re-vamped design in Dead or Alive 5, she has been given some slight changes. Her face has been made to look longer and more mature, she has a paler skin tone, and her hair is a little longer and not as spiky. Her body is also more voluptuous.

Compared to the other women's outfits in the series, Christie has some of the most "revealing," with a lot being tight and having plunging cleavage lines; her default outfit in Dead or Alive 4 doesn't even have an undershirt and her breasts are only covered by an open leather jacket. Her most recognizable outfit as shown in her profile picture and gallery includes a white catsuit with a slightly open zipper and black boots. 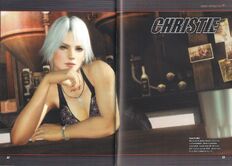 Add a photo to this gallery
Retrieved from "https://femalevillains.fandom.com/wiki/Christie_(Dead_or_Alive)?oldid=201416"
Community content is available under CC-BY-SA unless otherwise noted.