Start a Wiki
watch 01:48
The Loop (TV)
Do you like this video?
Christiane (Senta Berger) is an antagonist in the 1967 French thriller "Diabolically Yours", which was orginally entitled "Diaboliquement Votre".

Waking from a coma in a private clinic with amnesia, a man is told that he survived a car crash and that he is Georges Campo (Alaine Deion), a name he does not recognise. A beautiful woman he does not know, who says she is his wife Christiane, takes him to recuperate in a mansion in walled grounds. With her is a doctor, Frédéric Launay (Sergio Fantoni), who says he is an old friend from their days in business together in Hong Kong. At the mansion they are greeted by the half-Chinese butler Kim (Peter Mosbacher), who is offhand with him but has a suspiciously close relationship with Christiane. He is told that he must rest and take copious medication, while Christiane adds that there is no hope of any marital relations until he is fully well.

Voices start troubling him at night and he suffers nightmares, in one of which he is a coarse soldier called Pierre Lagrange fighting in Algeria. He discovers that he cannot get out of the grounds, that there is no telephone and that he is a prisoner. He suspects attempts on his life: an unsecured trap door opens under him, a large dog attacks him, a chandelier falls on him at dinner.

He realises he cannot be Georges Campo, because only Christiane and Frédéric claim he is, and that Campo must therefore be dead. While Frédéric is away one night, he forces himself on the not wholly unwilling Christiane and at breakfast tells Frédéric. Enraged at her treachery, he starts beating her, upon which the jealous Kim knifes him. She responds by shooting Kim and then confesses the whole plot. She and Frédéric had killed her husband Georges secretly but then needed a public death so they could marry and take over the Hong Kong business. They got the ex-soldier Pierre Lagrange drunk and crashed the car, but he survived. Then they had further attempts at killing him, which failed. Christiane offers to be a wife and business partner to him if he will carry on as Georges Campo. The police, when called to investigate the two deaths, do not believe him however. 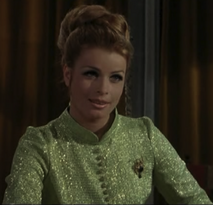 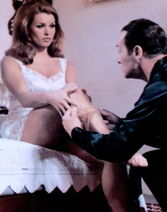 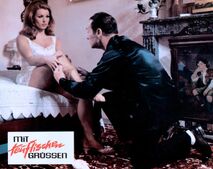 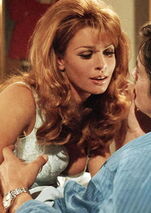 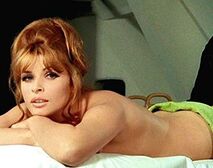 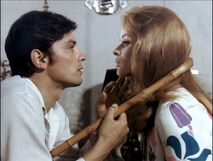 Add a photo to this gallery
Retrieved from "https://femalevillains.fandom.com/wiki/Christiane_(Diabolically_Yours)?oldid=179659"
Community content is available under CC-BY-SA unless otherwise noted.