Start a Wiki
watch 01:51
The Loop (TV)
Do you like this video?
Chloe Spade (Lindsay Hartley) is the secondary villainess of the 2016 Lifetime film Nightmare Nurse (airdate March 5, 2016). She was set up as appearing to be the film's main villainess, but this was done to hide the existence of the real villainess.

Chloe was an in-home nurse sent to the house of the two protagonists, Lance and Brooke, after the couple got into a car accident that killed a man named Darren Wells and also left Lance's right leg broken. During her time at said house, Chloe developed amorous feelings for Lance, and resorted to tactics such as licking his right nipple as she was changing his shirt, kissing him while he was sleeping on his couch, and even coming onto him.

All of these events occurred in spite of the fact that she had a boyfriend named James; one scene displayed Chloe having a sexual tryst with him, and their next appearance had the pair getting into an argument that ended when she kneed him in his pelvic region. She was also shown on her laptop looking at photos of Lance and Brooke together along with information on overdoses of oxycodone, which later happened to him. At the hospital, the male protagonist told his girlfriend that Chloe had been making passes at him, which led Brooke to call the police under the belief that the latter drugged the former.

It was unearthed that Chloe had a dark backstory, as she is a manic depressive—a person diagnosed with bipolar disorder—on antidepressants. Furthermore, the unhinged conspirator developed romantic feelings for a married actor when she cared for him in Brentwood, and after said feelings were discovered, she was fired from the agency she was working for at the time. Chloe attempted to visit Lance at the hospital with flowers, but she was stopped by Brooke, which led to a verbal confrontation during which she fired her. Subsequently, the psychotic femme fatale accused the female protagonist of not appreciating what she had.

She later eavesdropped on the couple's conversation with their friend Gwen as she made another attempt to visit Lance again. After overhearing that they planned to take her down, Chloe confronted Gwen in a parking garage and attacked her, leaving her in a coma. Following that, she visited their house again, pleading her case and stating that she didn't drug Lance, only for Barbara Stone (who replaced Chloe) to prevent her from entering.

After bursting into tears while in her car, Chloe was later found unconscious at her house by the police after she attempted to commit suicide via an overdose of oxycodone. She was shown at the hospital, with Barbara supposedly taking care of her—only for the latter to undergo her own heel turn by disclosing that she replaced her henchwoman's antidepressants with placebo pills and paid her $2,500 to ruin the protagonists' lives as part of her plan to exact revenge on the couple for Darren's death, as he was Barbara's fiancé. Upon realizing her erratic actions were facilitated by said pills, she voiced that she would not only tell the police everything about their scheme, but also stop being Barbara's henchwoman.

Just moments later, Chloe—who had slowly been drugged beginning after she was admitted to the hospital—passed out and was then placed in the back seat of Barbara's car, with James (who was heavily implied to have been killed offscreen) inside the trunk of said car. She regained consciousness, escaped, and broke into the couple's house, where she found the vengeful criminal attempting to murder Lance. After ordering her former co-conspirator to back away from him while pointing a gun at her, Chloe then ended up further drugged by her after she falsely promised to double her pay. Barbara was ultimately subdued by Brooke, and although Chloe's fate was never disclosed, the female protagonist decided to "get her some help" after Lance inquired about what they should do with her. This most likely indicates that Chloe was ultimately institutionalized offscreen. 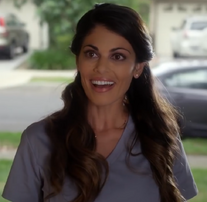 Chloe introducing herself to Brooke 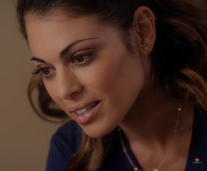 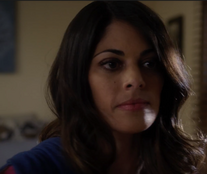 Chloe glaring at a photo of Lance and Brooke 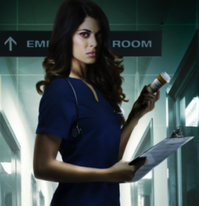 Chloe on the film's poster 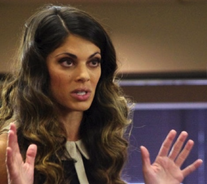 Chloe saying that she has been fired

Chloe after being drugged a second time
Add a photo to this gallery
Retrieved from "https://femalevillains.fandom.com/wiki/Chloe_Spade_(Nightmare_Nurse)?oldid=188505"
Community content is available under CC-BY-SA unless otherwise noted.