Chloe Myles' backstory revealed that she was a military brat, moving around numerous times with her father, James Miles, an Air Force pilot. James was the only family in Chloe's life, as her mother passed away when Chloe was a baby. Three years prior, James was enlisted to work for the CIA on Operation Chaos; which had him and other operatives investigating terrorist activity on the shared border between Paraguay, Argentina, and Brazil.

During the mission, James' cover was blown and he was held for ransom by a terrorist group, who demanded $1 million. Due to the policy against negotiating with terrorists, the ransom was not paied, and James ended up murdered by the group. The CIA higher ups deemed it an "acceptable loss," and ever covered up the details of James' death, claiming that he was killed in a bar fight.

In the three years that passed, Chloe searched for the truth regarding her father's death, and her search became a six-month long murderous mission. After learning that Nolan Willis, a Lt. Commander, was connected to the operation, Chloe seduced and engaged in a sexual tryst with his adopted brother, Petty Officer Sam Segar, before strangling him to death in the very beginning of the episode. The death was made to look like a sex act gone wrong, and it was revealed that Chloe had killed three other men--Jackson Holt, Taylor Cotton, and Kevin Chung--in the same manner. After Chloe was caught and interrogated by Dwayne Pride, the villainess arrogantly denied everything and boasted that there was no evidence to connect her to the victims, which--at the time--was factual.

Later on, Chris LaSalle (the only NCIS member Chloe had yet to meet) volunteered to go undercover as Nolan Willis, after it was uncovered that Chloe's actions were to draw out Willis. Pride reluctantly agrees, and during LaSalle's mission, Chloe talks to "Nolan" about her father and her upbringing, leading to Pride and Patton Plame looking into James. After Chloe informed LaSalle about her father's passing and the false report given, the real Willis revealed the truth about James' CIA connection and how he actually was killed by terrorists. As Chloe is about to ask "Nolan" something, she walks off in apparent embarrassment, leading to LaSalle following her outside.

Chloe and LaSalle made out, only for the former to reveal to the latter that she drugged him, after which she took him to an abandoned warehouse and ordered him to log in to a laptop to open up Chaos. The vengeful villainess threatened him at gunpoint to do so, and after two failed attempts, LaSalle logs in, allowing Chloe to copy and save Chaos before she drugs LaSalle again, this time nearly killing him before Pride saves him. In the episode's climax, the evil Chloe was on the verge of unleasing Operation Chaos just as Pride arrived with Tammy Gregorio and Sonja Percy. Despite Pride's warning that her actions would result in numerous agents' lives being in danger, the villainess defended her plan by stating that the truth about her father should be exposed. At that moment, the power was cut off intentionally, stopping the download, leading to Chloe pointing her gun and even asking the group to shoot her before she kills them. Pride refused to do so, asking Chloe to put down her gun and that the truth about her father would come out. Chloe acquiesced, and she was later arrested. 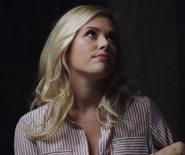 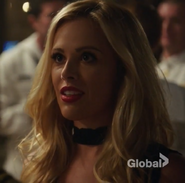 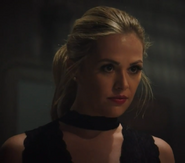 Add a photo to this gallery
Retrieved from "https://femalevillains.fandom.com/wiki/Chloe_Myles_(NCIS:_New_Orleans)?oldid=171250"
Community content is available under CC-BY-SA unless otherwise noted.