Chloe Blackburn (Carmen Electra) is the villainess from Monk episode 3.02: "Mr. Monk and the Panic Room" (airdate June 25, 2004). She is a pop diva and the wife of record producer Ian Blackburn.

Chloe was also having an affair with Kurt Wolff, who she met while he was handling security on one of her tours. Figuring that a divorce would be messy, the evil Chloe decided to collude with Kurt to kill Ian, which Kurt does by shooting him in his panic room. It was originally planned to be a single shot so it could look like a suicide, but since there was a struggle and Ian was shot four times, Kurt placed the gun in the hands of Ian's pet monkey, Darwin, making it look like Darwin actually killed Ian.

Chloe plays up that ruse when she is interviewed by Monk, claiming that Darwin is a beast who killed her husband. At the end of the episode, a newspaper article revealed that Chloe was arrested for Ian's murder. 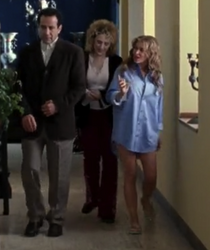 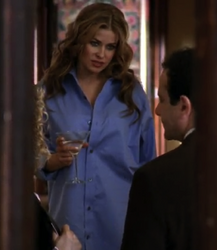 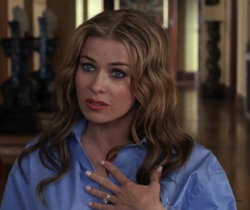 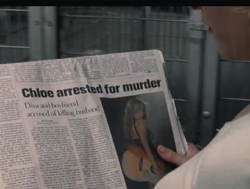 Add a photo to this gallery
​
Retrieved from "https://femalevillains.fandom.com/wiki/Chloe_Blackburn_(Monk)?oldid=203284"
Community content is available under CC-BY-SA unless otherwise noted.