China (Sheeba Alahani) is a villainess from the 1987 movie "The Barbarians" by Ruggero Deodato.

She is a powerful evil sorceress, who serves lord Kadar, the main villain of the movie, but she serves her own goals aside from him. Kadar has captured queen Canary, and enslaves her, but China seeks a rare magical ruby gem, and Canary knows where to find it, so she has her whipped until she tells the truth.

China and her henchmen go to a remote swamp where the ruby is hidden, but her escort is decimated, and she is herself eaten alive by a giant swamp monster. Later, the heroes kill the monster, and explore his insides, to find China's corpse, still holding the ruby in her hand. 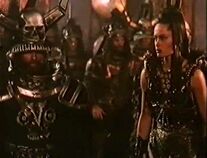 She likes to defy Kadar's authority

she is a powerful sorceress

Kadar loses his temper, but China is not impressed that easily

Canary has been whipped

you will tell me : where is the ruby?

China's corpse, with the magical gem in her hand
Add a photo to this gallery
Retrieved from "https://femalevillains.fandom.com/wiki/China_(The_Barbarians)?oldid=107192"
Community content is available under CC-BY-SA unless otherwise noted.