Start a Wiki
watch 01:50
The Loop (TV)
Do you like this video?
Chickadee is a henchwoman of arch criminal the Penguin (Burgess Meredith) in the 1960s live action TV series Batman. She was played by actress Grace Gaynor (1933 - 2018).

To kill Batman and Robin.

Knocked out by Mrs Cooper.

The Penguin has an elaborate scheme to deliberately get himself put into Gotham State prison in order to link up with a master forger, "Ballpoint" Baxter. The arch crook, pretending he's going straight, opens a restaurant called "The Penguin's nest". Secretly he's collecting handwriting samples of the wealthy patrons of his restaurant to enable Baxter to forge their signatures on checks. But, despite stealing jewellery from Mrs Cooper, assaulting Chief O'Hara and Commissioner Gordon, attempting to murder O'Hara along with Batman and Robin, and pretending to kill one of his henchmen, Penguin is thwarted in his attempts to get himself sent to the prison (he only gets as far as the city jail, imprisoned among petty criminals). A frustrated Penguin finally breaks into Wayne Manor and demands a million dollars from Bruce, or he will kill his hostage, Alfred the butler. But the Penguin and his gang are defeated in a fight with Batman, Robin, Alfred and Mrs Cooper. Now, finally, it seems the Penguin is to get his wish to be sent "up the river" to rendezvous with "Ballpoint" Baxter. However, while waiting at police HQ to be sent away, the furious Penguin and his gang find Ballpoint is being paroled under the supervision of Bruce Wayne to work with underprivileged children.

Chickadee is a good looking white brunette in her 20s. She wears a red cigarette girl costume throughout both episodes.

Chickadee's character and role in the story -

Chickadee is one of Penguin's crime gang, posing as a hat check and cigarette girl at the arch villain's "legitimate" restaurant, "The Penguin's Nest". Chickadee is high on the list of the most incorrigible criminal type henchwomen/molls who feature in the series. Commissioner Gordon describes her as a "notorious female bootlegger of untaxed cigars". She's also one of the fairly uncommon gun toting villains on the show (firearms don't figure very much generally in the series, but these 2 episodes are notably gun orientated). Something of a "giggling psycho", she takes a significant and enthusiastic part in the Penguin gang's villainous activities. A completely ruthless criminal, she clearly gets a lot of fun out of crime. Among her actions are - tripping Chief O'Hara, then holding him as a hostage at gunpoint, assisting with Penguin's death trap by shoving the hapless Chief into an electrified swimming pool while he's locked in a trunk, and holding the elderly Mrs Cooper captive with an umbrella gun - threatening to "blow the old lady's brains out!".

A pistol. A Penguin umbrella gun.

Chickadee is a rarity among the henchwomen in the series in that she doesn't just get arrested at the end of the story, but has a physical comeuppance too. This seems very appropriate, as Chickadee is one of the really "bad girl" henchwomen in the series. During the final fight at Wayne Manor, seeing her side's losing,  Chickadee threatens to shoot Mrs Cooper unless Batman and Robin stop demolishing Penguin and his men and surrender. But Alfred foils Chickadee as he grabs at her umbrella gun - Mrs Cooper then KOs the henchwoman on the head with a vase, knocking her out. We next see Chickadee in handcuffs with the rest of the Penguin gang at police HQ, where they are soon all taken off to prison. For another analysis of Chickadee and Grace Gaynor's career see 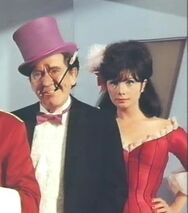 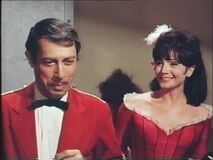 Chickadee at the Penguin's Nest (Grace Gaynor with Vito Scotti) 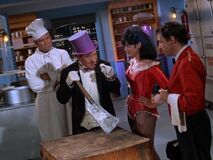 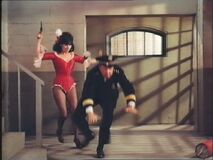 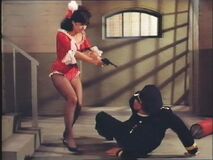 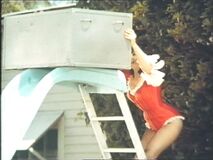 Chickadee about to push O'Hara in the pool (Grace Gaynor) 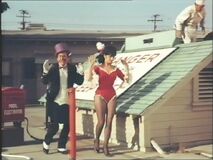 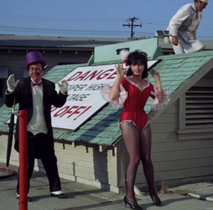 Surrender is never far away for a villainess 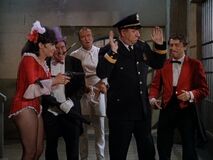 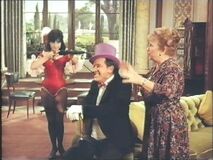 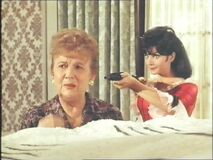 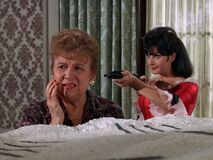 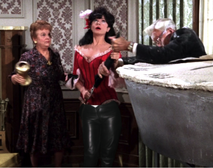 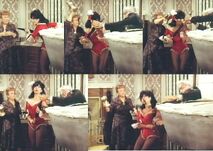 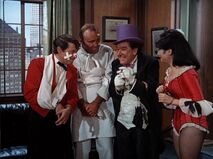 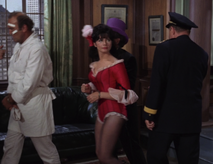 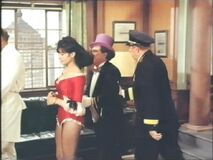 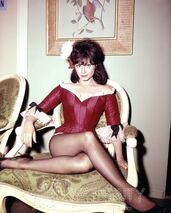 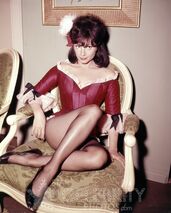 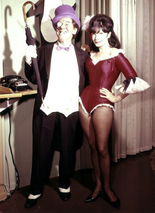 Add a photo to this gallery
Retrieved from "https://femalevillains.fandom.com/wiki/Chickadee_(Batman)?oldid=186927"
Community content is available under CC-BY-SA unless otherwise noted.