Chianti (Kikuko Inoue) is a recurring villainess from the anime series Case Closed. She was an assassin working for the illusive crime ring known as The Black Organization, making her first appearance in episode 14.36, "Black Impact! The Moment the Black Organization Reaches Out" (airdate January 9, 2006) using a sniper simulator with her partner, Korn.

The episode's progression reveals that Chianti was a part of the Black Organization's plan to assassinate Shuugiin candidate Yasuteru Domon due to his budding political influence, with fellow Black Organization members Gin, Vodka, Vermouth, and Hidemi Hondou (later revealed to be a CIA agent working undercover to take down the Black Organization) aiding the plot. Chianti was shown to be vehemently against Vermouth joining the plan due to her having killed Black Organization agent Calvados previously, only for Gin to assure her that Vermouth was just there as a precaution. Korn also shared Chianti's hate for Vermouth, with Chianti expressing disgust in Vermouth wishing her good luck on their mission and proclaiming to Korn her strong desire to kill Vermouth.

The villainous quintet intended to kill Yasuteru in Haido Park, with Hidemi (publicly known as reporter Rena Mizunashi) conducting an interview with Yasuteru at the park as a ploy to facilitate his assassination. Unbeknownst to the group, Conan Edogawa had uncovered Hidemi's role in The Black Organization after one of his tracking/listening devices became stuck on her following an investigation Kogoro Mouri did for her, with Conan (aided by Ai Haibara) deducing that Haido Park was the location of the planned assassination and going with FBI agent Jodie Starling to stop it. As Hidemi worked on getting Yasuteru into position to be killed, Chianti and Korn were shown on top of two buildings near the park, armed with sniper rifles trained on Yasuteru.

The group's plan was foiled, however, when Conan had Jodie shot several sprinklers in the park, causing everyone in the park gathered for the interview to believe it was raining and open their umbrellas, forcing the gang to stand down due to the umbrellas obscuring any viable shots at Yasuteru. Chianti was later present as the gang formulated a new plan to kill Yasuteru, with the plan utilizing Vermouth. This plan also fails when Hidemi is confronted by Jodie and fellow FBI agent James Black while driving, resulting in her crashing and being injured. Gin also discovered Conan's device on Hidemi's shoe, leading him to send Chianti, Vermouth, and Korn to kill Kogoro Mouri out of a belief that he planted the device. Before Chianti could fire at Kogoro, Conan was able to stop her by kicking a soccer ball at the window of Mouri Detective Agency, allowing him to reveal to them that Kogoro didn't plant the device. Despite this, Gin ordered Chianti to kill both Kogoro and Conan, with the evil Chianti agreeing to the plan. However, the quintet was stopped once more when FBI agent Shuichi Akai began firing shots at them (one of which destroyed Conan's tracking device), forcing them to flee the scene. 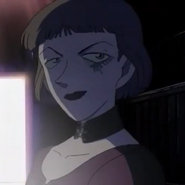 Add a photo to this gallery
Retrieved from "https://femalevillains.fandom.com/wiki/Chianti_(Case_Closed)?oldid=194419"
Community content is available under CC-BY-SA unless otherwise noted.