Start a Wiki
watch 01:50
The Loop (TV)
Do you like this video?
Cheryl Dixon (Isabella Hofmann) was the hidden main villainess from the 2017 Lifetime film, A Neighbor's Deception (alternately titled, Next Door; airdate April 6, 2017).

It was after Chloe met Abigail, who sold the Dixon's new home to them, that Cheryl's villainous identity was revealed, and after Chloe returned to her home that night, she was attacked by the crazed villainess, who attempted to kill her. Cheryl had the wire wrapped around Chloe's neck, but Chloe fought back against her and attempted to escape. Cheryl caught Chloe and knocked her out, and later tied her to a chair. Chloe found herself facing both Dixons, with Gerald claiming that he and Cheryl look out for each other. Gerald had reservations about harming Chloe, but Cheryl was insistent on killing her, and after an argument, the villainess placed a plastic bag over Chloe's head and taped it to her; attempting to suffocate her. Michael later arrived home and noticed the home in shambles, and he later found Chloe tied up. Seeing this, Michael cut the bag open with a knife, but later saw Cheryl charging after him. Michael plunged the knife into Cheryl's chest, and as he revealed in the film's end, Cheryl succumbed to the wound. 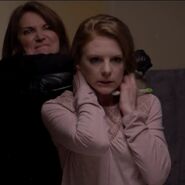 Retrieved from "https://femalevillains.fandom.com/wiki/Cheryl_Dixon_(A_Neighbor%27s_Deception)?oldid=195786"
Community content is available under CC-BY-SA unless otherwise noted.