Charlotte Smoothie is the 14th daughter of the Charlotte Family and one of the Three Sweet Commanders of the Big Mom Pirates. She also serves as Totto Land's Minister of Juice. She is a hybrid between a human and a member of the Longleg Tribe. Due to her actions, she is a major antagonist of the Whole Cake Island Arc.

Smoothie is a statuesque woman from the Longleg Tribe with tan skin, blue eyes, and prominent lips with silver lipstick (lavender in the anime). Like all longlegs, she is exceptionally tall, standing 464 centimeters. Additionally, she has disproportionately large hands, even for her size, as she was able to wrap one hand around Nami's waist. She has long and wavy white hair that covers her right eye and stretches down her back. She wears a pink striped leotard, a large yellow scarf that flows nearly to the ground, sleeves around her elbows, a huge floppy cap resembling an oversized beret, and a pair of long dark boots, which reach up to her knees, with decorative adornments at the top. She also has a tattoo of a rose on her upper right leg.

Smoothie approaches things with a carefree attitude. She will agree to help crewmates if she has the time but tends not to display any investment into any task. However, she will be remorseful if she fails that task. She has a very cruel side as she likes to squeeze the life out of her subordinates, even when being pleaded to stop, and enjoys drinking the liquid produced while callously dropping dried-out bodies aside, treating them as a source of liquid rather than people. This is further shown when she hung a woman from a rope, along with a giraffe and a volcanic rock, using them as drink dispensers and when she licked her lips when grabbing Nami. Though she may be carefree most of the time, Smoothie can get very serious should the situation require it, and will waste no time in creating tactics to smooth out the problem in the most efficient way possible. She is also perceptive on other people's nature and will make decisions based on how someone might react, as shown when she neglected to tell Big Mom about the prisoner revolt in Whole Cake Chateau due to knowing that her mother would fly into a rage nobody would want to deal with. During special occasions, such as Big Mom's Tea Party, she can be friendly and polite, greeting the guests and warmly offering them drinks. Smoothie shows intrigue and concern of people who are able to damage her, remarking upon Reiju's power as she squeezed the poison out of her arm while calling Reiju "trouble". The only time Smoothie has shown to lose her composure completely is when her mother goes on a rampage due to her craving for cake. During that moment, Smoothie panicked and screamed to her siblings to run while fleeing from her rampaging mother. Despite being a crossbreed, Smoothie shares her paternal heritage by exposing and decorating her long legs. She would do anything for revenge, what you can see when she tried to kill jinbei even if she had to kill her Crewmembers to achieve it. To her siblings seh seems to be nice and friendly. Even if she is going to far to achive her goals, she would never harm her siblings. 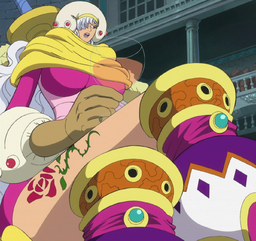 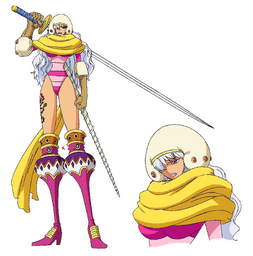 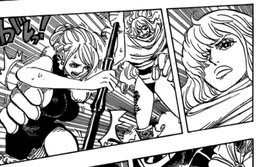 Add a photo to this gallery
Retrieved from "https://femalevillains.fandom.com/wiki/Charlotte_Smoothie_(One_Piece)?oldid=194418"
Community content is available under CC-BY-SA unless otherwise noted.