Charlies Mayweather is the Senator's aide who is also the daughter of a Senator.  She appears to help xXx-Agent Lt. Darius Stone (Ice Cube), taking him to her father's house and flirting with him.  She then frames him for the murder of a dignitary while he's in the shower.

Charlie works for U.S. Secretary of Defense George Deckert (William Dafoe), and Stone finds her on the USS Independence.  She's talking to Agent Augustus Eugene Gibbons (Samuel L. Jackson) who is imprisoned with the rest of the good half of Stone's former unit.  She taunts them, activating the alarm in the process and Stone knocks her to the ground.  He doesn't kill her, despite Gibbons' urgins.

After the President has been captured, Stone and his team meet her inside the capitol. They kill her men and she is - again - knocked out by Stone's gun hilt. Charlie quickly recovers from the punch though and while trying to shoot Stone, she herself is fatally shot by her now freed prisoner Gibbons. He goes on to lecture his xXx-Agent how he has told him beforehand to kill her. Instead of agreeing, Stone rather seems shocked and gives Charlie's dead body a last remorseful look.

Beautiful Charlie in her formal attire 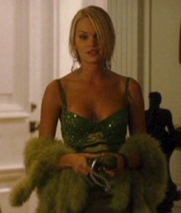 Charlie before her evil reveal 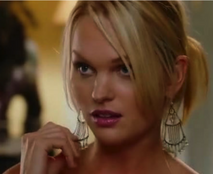 Dressed in a strong white power suit, Charlie agrees to help out Stone

Charlie and her hostages are ambushed!

One of the black heroes doesn't take any lip from the devious blonde!

Down, but not out!

Bleeding from the gun butt in the mouth, her eyes are filled with hatred.

POW! The hero is faster on the draw!

The bullet impact propels her backward.

The heroes gloat as their beautiful but deadly enemy falls.

She is f**ked for good!
Add a photo to this gallery
Retrieved from "https://femalevillains.fandom.com/wiki/Charlie_Mayweather_(XXX:_State_of_the_Union)?oldid=203215"
Community content is available under CC-BY-SA unless otherwise noted.