Start a Wiki
watch 04:10
The Loop (TV)
Do you like this video?
Charlie (Gina Varela) is a villainess from Power Rangers SPD. She is the evil leader of the traitorous A-Squad Rangers.

Charlie was the arrogant leader of the A-Squad. She never interacted with the B-Squad (they didn't even know that she was a woman) and she showed contempt for them, saying that they're "not fit to shine their boots". SPD was unaware of her true personality, though Bridge Carson once noticed that something was "off" about her and her team's aura.

As A-Squad's leader, she dealt with more serious attacks on Newtech City and Earth. She destroyed the first of Broodwing's robots in "Beginnings".

Before Emperor Gruumm attacked Earth, he sent his forces to the Helix Nebula in order to draw out the A-Squad. Charlie's team was dispatched, but shortly after, she sent a garbled distress signal as the team was overrun. SPD continued to search for the A-Squad but Anubis Cruger feared they'd been killed in action ("Walls", "Dogged").

In reality, Charlie and her team had betrayed SPD and joined Gruumm - Charlie would later say that "everyone wants to be on a winning team". On his behalf, they attacked and slaughtered the SPD outpost on Gamma 4.

Later, the squad faked having crashed on Gamma Orion and were "rescued" by the B-Squad (Charlie was annoyed at Jack for being surprised that she was "a girl"). Once they were back on Earth, Charlie kidnapped Cruger and took him to Gruumm's warship; she didn't care when Cruger denounced them as Rangers.

Her next act was to call out the B-Squad to meet them in battle, where Charlie and her Rangers pounded them into the dirt and mocked them. Unfortunately for Charlie, the B-Squad activated SWAT Mode and resorted to improvised battle tactics Charlie was taken down by Jack Landors. Charlie summoned the A-Squad's Megazord to continue the fight and helped destroy the Delta Squad Megazord, but a rematch with the SWAT one blew it to pieces. Her last words before being arrested was an outraged denial that B-Squad could "do this" to the A-Squad.

Before the Zord battle, Charlie had said "then we'll take care of Broodwing" - A-Squad then proceeded to stand around doing nothing until B-Squad came back and easily defeated them. Laying defeated and about to be arrested, Charlie was outraged by the idea that the A-Squad could possibly be beaten by their "inferiors" and said the B-Squad couldn't do this since they were A-Squad, but Jack didn't care saying that she and the rest of her team are being demoted before placing them in confinement cards and the A-Squad position was disbanded after B-Squad refused to accept the position of A-Squad.

The UK's Jetix Magazine SPD strip had a different finale to the show: there, Charlie was brainwashed instead of corrupted. The B-Squad defeated her team and were later promoted to A-Squad themselves. 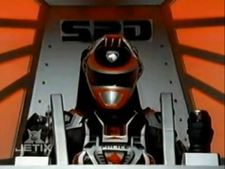 Charlie as the A-Squad Red Ranger 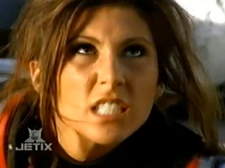 Charlie's evil snarl in defeat
Add a photo to this gallery
Retrieved from "https://femalevillains.fandom.com/wiki/Charlie_(Power_Rangers_SPD)?oldid=181375"
Community content is available under CC-BY-SA unless otherwise noted.