Start a Wiki
watch 01:51
The Loop (TV)
Do you like this video?
Celeste Masters is a villainess from "Flatline", case #7 of Criminal Case: The Conspiracy, the 5th season of the crime solving game Criminal Case (release date March 1, 2018). She was a patient of Dr. Greg Gibbs, the murder victim of the case, and was questioned in regards to his death after a recent message from her was found on the doctor's pager, urgently asking to see him.

When questioned by the player and Gloria Hayes, Celeste revealed that her daughter Jennifer was a patient of Gibbs', her having had an unspecified illness for a long time. Celeste began distraught upon being told about Greg's murder, claiming that she'd been desperate to contact Gibbs due to Jennifer's condition worsening and venting about her struggles to care for her. Later on, though, a tampered box of morphine was found in Gibbs' office, with the saliva found on it proving that it was Celeste who had attempted to steal morphine from the doctor.

While Gloria initially believed Celeste was trying to steal the morphine for her daughter's medical care, her and player's questioning of Celeste regarding her actions revealed the truth: Celeste was a morphine addict, and had attempted to steal from Dr. Gibbs to feed her addiction. Celeste also revealed the whole truth regarding Jennifer's medical history: she had undergone a series of operations the previous year, and was prescribed morphine by Gibbs to relieve the pain. When Jennifer recovered and Celeste saw she had some morphine left over, she resorted to using the drugs herself as a result of the stress she had been put under as a result of her daughter's ailment. After angrily revealing that Gibbs had refused to prescribe her more morphine, Celeste was placed under arrest for breaking and entering, though Gloria's suspicion that Celeste was driven to kill Gibbs due to her addiction was proven wrong. 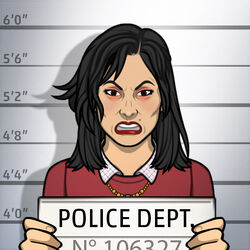 Add a photo to this gallery
Retrieved from "https://femalevillains.fandom.com/wiki/Celeste_Masters_(Criminal_Case)?oldid=146040"
Community content is available under CC-BY-SA unless otherwise noted.