Start a Wiki
watch 01:51
The Loop (TV)
Do you like this video?
Catwoman (Lee Meriwether), was an arch-nemesis of Batman in the 1966 movie Batman, also known as Batman: The Movie. The movie was based off the 1960's Batman TV series, with Lee Meriwether staring in her only apperance as Catwoman.

Catwoman teams up with three other supervillains- Riddler, Penguin, and Joker. Together they form the "United Underworld." Their aim is to defeat Batman and Robin and take over the world. They begin by kidnapping Commodore Scmidlapp and stealing his invention- a machine that can dehydrate any object. The villains plan to use it to dehydrate the United World Security Council and hold them for ransom. But first, they need to make sure Batman isnt around to thwart their plans...

Catwoman is pure evil in this movie and shows no hesitation in trying to have Batman and Robin killed. She celebrates enthusiastically when she thinks they are dead and tries to escape at the end before she is captured after stumbling and knocking herself out!

Catwoman introduced at the beginning of the movie 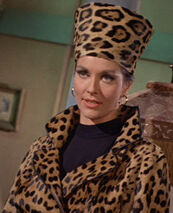 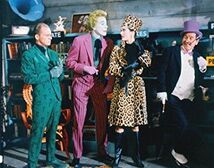 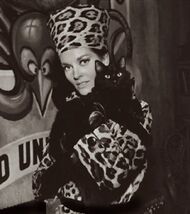 Riddler proposes using Catwoman as "bait" to lure a millionaire into a trap! 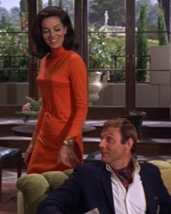 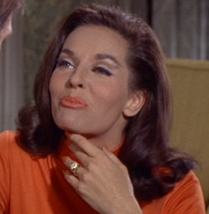 Catwoman displays her wares, as Kitka, luring Bruce Wayne into a kidnap trap

Back at United Underworld with Bruce Wayne as their prisoner!

A fight breaks out!

After Bruce Wayne escapes, the villains need to come up with a new plan

Catwoman is frustrated, "We've got to do something to get Batman out of the way!"

Catwoman and her villainous allies test out a new "dehydrator" weapon

Sweeping up the remains of their dehydrated henchmen!

A disagreement with the Riddler

Riddler uses explosives to open the back door!

The villains are shocked to see the Dynamic Duo!

Catwoman and Penguin with the dehydrated Security Council in test tubes!

Thinking they've made a clean getaway, Catwoman demands a billion dollar ransom from each country!

Something is chasing the submarine- It's the Batboat!

Catwoman closely monitors the screen as Penguin orders missiles to be launched at Batman's boat!

Assuming they've destroyed Batman, the villains celebrate as they hear their missile explode!

The villains celebrated too soon- the Batboat is still in pursuit!

What now? Catwoman and her allies consider their options as Batman closes in

Penguin decides to fire torpedoes at the Batboat!

The torpedoes also fail to hit the Batboat!

Where is the Batboat now?

Catwoman looks up apprehensively as she learns that Batman's boat is circling the submarine!

Catwoman is rocked as a "batcharge" hits the submarine

Catwoman screams in terror as the submarine begins to take on water!

After the submarine surfaces, Catwoman observes the battle between her men and the Dynamic Duo

Catwoman throws her cat at Batman!

Catwoman sneaks up on an unsuspecting Robin and...

....pushes him into the water!

Catwoman pushes Batman off the submarine!

After pushing Batman and Robin off the submarine, Catwoman stands victorious!

Catwoman is stunned as she sees Batman climbing back up to the submarine deck!

Catwoman climbs back into the submarine as the Dynamic Duo gives chase!

Catwoman stumbles as she tries to escape justice!

Catwoman falls and is knocked out, losing her mask!

Batman discovers Catwoman on the floor of the submarine 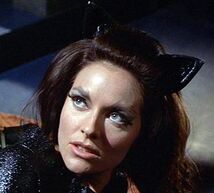 Robin orders Catwoman to get up, but they are interrupted 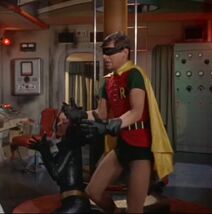 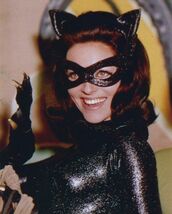 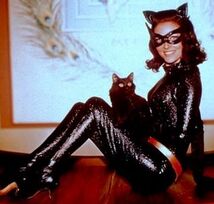 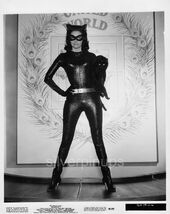 Add a photo to this gallery
Retrieved from "https://femalevillains.fandom.com/wiki/Catwoman_(Batman:_The_Movie)?oldid=190788"
Community content is available under CC-BY-SA unless otherwise noted.