Catwoman is a villainess in the graphic novel Batman/Demon: A Tragedy.

Catwoman is professional criminal in Gotham City. Killer Croc hired her to track down whoever was killing his men. This murderer was actually the bat-demon Etrigan.

Catwoman claims to have sold her soul to a devil to get fighting skill. Killer Croc offered to pay her in sex but she declined and asked for gold instead.

When Catwoman fought Etrigan the first time, he had been weakened by Poison Ivy and she nearly killed him with her claws. Following this, she was seen performing bank robberies with Killer Croc. However, Etrigan was not weakened during their second meeting, and he easily beat her to a pulp. Then he grabbed her head and burned it to a charred skull with his fire-breath. 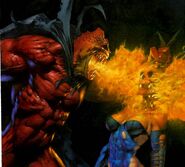 Add a photo to this gallery
Retrieved from "https://femalevillains.fandom.com/wiki/Catwoman_(Batman/Demon:_A_Tragedy)?oldid=199517"
Community content is available under CC-BY-SA unless otherwise noted.