Start a Wiki
watch 01:38
The Loop (TV)
Do you like this video?
Catra is a fictional character in the toyline, and animated television series, She-Ra: Princess of Power, which is part of the Masters of the Universe franchise. In the animated series, Catra is the Force-Captain of Hordak's Evil Horde, a position previously held by Adora, before she defected. Catra displays minor sorcery abilities. She possesses a magical mask, which when slid over her face gives the ability to transform into a purple panther. She has also shown telepathic control over all cats. In the toyline, she is the principal villain.[10]

When a race called the Magicats were taken prisoner, their Queen set out to find them. The Queen however was also captured and imprisoned by Hordak. Without the magical mask, which bestowed on her the title of Queen, she was powerless to escape. Hordak had taken the mask from her and had given it to Catra, from which she gained her feline qualities, and the ability to transform into a large panther. To transform into her feline state, Catra slides the mask from her forehead over her eyes. In her cat form, she retains the ability to speak and possesses greater strength than her human form.

When Adora is reconciled with her twin brother Adam, she leaves The Horde and is replaced by Catra as the Force-Captain. Several times, while serving Hordak, Catra strikes out on her own, showing that she does not need Hordak. This is quite evident when Catra betrays Hordak to Skeletor, in an attempt to overthrow him. Even though there are a few other female villains in The Horde, Catra does not get on that well with any of them, only working with them as a last resort. She appears to have a particularly intense rivalry with fellow female villain Scorpia. Catra, along with the other Horde members, holds an intense hatred for Imp.

With the magical mask, Catra is able to transform into a panther with light purple fur. One of the most overlooked details about Catra is that she also possesses the power of teleportation. She only demonstrates this ability on one occasion and it is uncertain where this power originates, although it is assumed that it is another power bestowed by her magical mask. However, the Magicat elder, Tao states that the Queen kept virtually all of the mask's powers secret, so this is unlikely. However, Tao does reveal one of the powers to Catra called Freezefire, that generates an energy beam that can encase its target in ice. Catra has subsequently lost any knowledge of this power. Additionally, the Magicat Percival, states that once the mask has been used for evil, it can no longer be used for good. 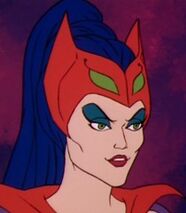 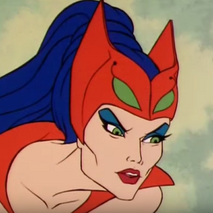 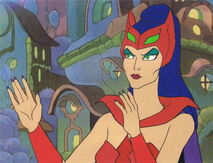 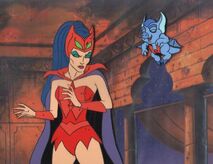 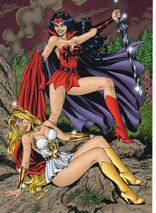 Add a photo to this gallery
Retrieved from "https://femalevillains.fandom.com/wiki/Catra_(She-Ra:_Princess_of_Power)?oldid=185211"
Community content is available under CC-BY-SA unless otherwise noted.