Start a Wiki
watch 01:48
The Loop (TV)
Do you like this video?
Catherine Windsor (Lesley-Anne Down) is the main villainess from "A Model Murder," episode 4.06 of Diagnosis Murder (airdate October 17, 1996).

Catherine Windsor is a showbiz photographer who was shown in the beginning of the episode sneaking into the office of private investigator Ray Donovan. Donning a red wig as a disguise, Catherine entered Ray's office and killed him with a single gunshot. She was later at her studio with her daughter, Wendy, as well as Wendy's fiance, Rick Brooks (who is a longtime friend of Jesse Travis). Catherine continually voiced her displeasure over Wendy's engagement to Rick, as it was revealed that Wendy's father left Catherine while she was pregnant with Wendy.

It was also revealed that Wendy had two previous fiancees, Darren Lomax and Brian Windsor, and both were killed by Catherine. She had run down Darren in her Mercedes, and she shot and killed Brian. Regarding a motive for Ray Donovan's murder, he had evidence of Catherine's role in Brian's death; an x-ray that showed where the body was buried. As for Rick, the evil Catherine attempted to bribe him into breaking off his engagement to Wendy, only for both of them to reveal that they had already become husband and wife, much to Catherine's extreme consternation.

After Jesse informed Catherine about the file, Catherine attempted to plant a fake empty file which would draw attention off her, only to be caught by Mark and Steve Sloan. Catherine attempted to escape, and even fired shots at Steve, only to fire a warning shot at the villainess. Catherine was defeated and arrested, but she stated to Mark that "It's not over." In the very final scenes of the episode, Mark found out what Catherine meant by her ominous words during Rick and Wendy's wedding reception. Rick was set to open a bottle of wine that was sent anonymously to the couple, but he was prevented from drinking it by Mark, who pinpointed the scent of cyanide in the wine. The wine was sent by Catherine, as she had planned to kill Rick.

Though the motive for killing Ray Donovan was clear, the motive for killing Wendy's past fiancees and the attempt on Rick was not revealed. It could be suggested that Catherine being rejected by Wendy's father drove her to madness and led her to despise any man in her daughter's life. It was revealed by Steve Sloan that Catherine is undergoing psychiatric evaluation. 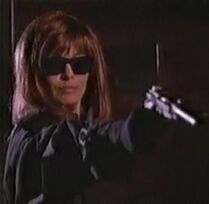 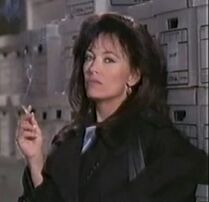 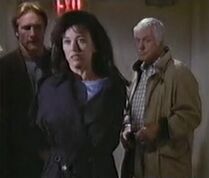 Catherine Windsor's arrest
Add a photo to this gallery
Retrieved from "https://femalevillains.fandom.com/wiki/Catherine_Windsor_(Diagnosis_Murder)?oldid=192604"
Community content is available under CC-BY-SA unless otherwise noted.